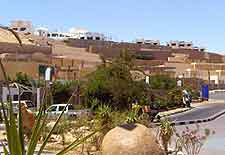 Until the mid-20th century, Sharm el Sheikh was just a simple Egyptian fishing village focused around its harbour. Today, it has grown into one of Egypt's most popular resort destinations, with much daily life still focused on the same harbour.

Downtown Sharm el Sheikh is a particularly popular district and the place to head for glitzy nightlife, although the resort areas, especially Naama Bay, also offer excellent restaurants, bars and clubs. For some peace and quiet and the chance to stay in a romantic villa, head to the El Hadaba area of Sharm el Sheikh, where you can see many locals getting on with their daily lives. 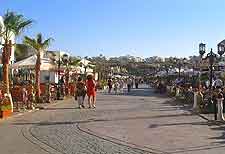 The Greater Resort Area of Sharm el Sheikh includes Sharm el Maya, Naama Bay, Garden Bay, Tiger Bay, Sharks Bay and Nabq Bay. This area is home to most of the city's main hotels and resorts. Some resort compounds are only open to guests, while others are available for everyone. Naama Bay, meaning 'pleasant' in Hebrew, is the best-known area and is also where most hotels are to be found. You will find a number of truly top-class hotels here, such as the Four Seasons, Hyatt, InterContinental and Hilton. There are also some excellent restaurants around the Naama Bay area of Sharm el Sheikh, as well as good bars and plenty of shopping opportunities.

The downtown area of Sharm el Sheikh, also known as the Old City, is fairly small in comparison to the actual size of the city. This district is however home to a number of restaurants and nightspots, as well as fast food restaurant chains and cafés. You will also find the local bazaar, the main port and the marina within the downtown district. Downtown is the spot to head for a vibrant and lively atmosphere, as well as being the place where most business is conducted and many hotels are located.

Just 6 km / 4 miles south of the Old City area is Sharm el Sheikh's bustling harbour. There is an enormous cliff in this location, which looks down onto the port, and many visitors come here to enjoy the spectacular views. The small harbour, Sharm el-Moiya, is located next to the civil harbour, where boats and very expensive yachts can be seen glistening in the sun.

This part of the city is largely residential and boasts a number of holiday villas and apartments. The El Hadaba district is true suburban Sharm and whilst you will find a handful of hotels and restaurants, it is a lot quieter than other areas and offers a glimpse at everyday life in Sharm el Sheikh.