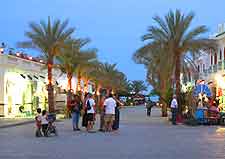 Sharm el Sheikh plays host to a number of annual festivals, many of which are unique to the city.

Nationwide celebrations are honoured, while specific events include fishing competitions in both May and November, and Sharm el Sheikh's world-famous International Shopping and Tourism Festival, which is held each July and always draws large crowds.

Celebrations mean that visitors are able to experience true Egyptian traditions and interact with locals during these distinctive activities. Worth looking out for are the fun races at the International Camel Competition every April, followed by the National Fishing Competition each May and the International Diving Competition held later in the year, in October. Most of the national holidays in Egypt also come with an array of things to do and enjoy.