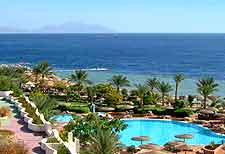 Although Sharm el Sheikh may be famous the world over for its truly awesome scuba diving, snorkelling and underwater scenery, it is not known for having cheap hotels. Budget accommodation is scarce in Sharm el Sheikh and if you are hoping for a view of Na'ama Bay and the beachfront, you will certainly have to pay extra.

Hotels here tend to fall into the mid-range category, although there are some camping sites to be found around Shark's Bay, some 6 km / 4 miles to the north-east of Na'ama Bay. Several luxury options and top-end hotel resorts can also be found in Sharm el Sheikh, with the best choices overlooking the Strait of Tiran, enjoying stunning, panoramic waterfront views. 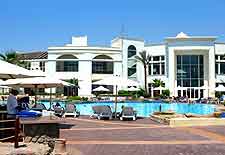 One of the cheapest places to stay in Sharm el Sheikh is without doubt the city's extremely popular Youth Hostel along Council Street, in the Hadaba area. Featuring rooms with either two or three beds, the accommodation here may be basic and rather soulless, but the rates are rock bottom for the area. Sharm el Sheikh's Youth Hostel is linked to the beachfront by many regular shuttle buses.

Many of the most popular mid-range hotels also reside in the Hadaba area and many are much cheaper than comparable lodging that is considerably closer to the beach. The majority of hotels in this part of Sharm el Sheikh line a wide strip and include the Amar Sina, the Creative Mexicana Sharm Resort, the Sunset Hotel and also the Tropicana Tivoli. 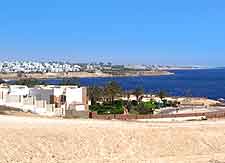 The Na'ama Bay area of Sharm el Sheikh is a particularly popular place to stay and as a result of its beautiful scenery and coastline, is full of moderately priced hotels. Some of the best mid-range choices in Sharm el Sheikh include the Camel Hotel along the King of Bahrain Street, the Tropicana Garden Palms Hotel, the Sinai Star Hotel and the Days Inn Gaft, all of which can be found along the Sharm-Na'ama Bay Road.

Top-end hotels in the city are clustered all around Na'ama Bay and also head to the north, towards the Sharm el Sheikh International Airport and around Shark's Bay. In recent years, much of the area has been developed with tourism in mind and a number of stunning five-star resorts stand proudly in this region. Amongst the best accommodation along the Sharm el Sheikh's Na'ama Bay and beyond are the Coralia Hotel, the Mövenpick, the Hyatt Regency, and also the Hilton Fayrouz Village complex of deluxe bungalows.