Sharm el Sheikh Weather, When to Go and Climate Information

Egypt is known for its extremely hot and sunny climate, and the weather in Sharm el Sheikh is by no means an exception to this. With hot summer sunshine blasting down from June through September, even the winters in Sharm el Sheikh are extremely warm, with plenty of sunny weather to go around.

Located on the most southerly point of Egypt's Sinai Peninsula and standing alongside the Red Sea, the weather in Sharm el Sheikh may be hot in the summer, but the relatively low levels of humidity make these temperatures much more bearable. 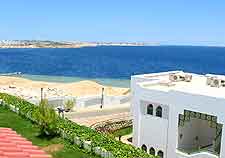 In general, Sharm el Sheikh only has two noticeable seasons, a long winter period between November and April, and a summer for the rest of the year, from May to October. The only noticeable difference between the climate in these two periods are really the temperatures and some strong, prevailing winds at times. Fairly predictable are the 'khamsin' winds of April, a gusty spell bringing much sand and dust to many parts of Egypt, including Sharm el Sheikh, from arid, African deserts to the west.

Many people choose to visit the Sharm el Sheikh area outside of the summer season, with temperatures averaging around 25°C / 77°F between February and April, rising to more than 30°C / 86°F in May. Early autumn is also a popular time to stay, between September and November, when the climate is especially pleasant, the waters are extremely warm, and temperatures stay around the mid-20s once again.