Getting Around, Sharm el Sheikh Travel, Transport and Car Rental 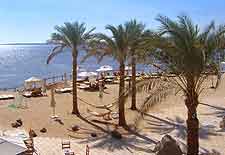 Transport around Sharm el Sheikh is very straightforward, with the majority of people arriving by air at Ophira International Airport (SSH). There are direct flights with many worldwide destinations, although all journeys are chartered. It is also possible to fly into the larger airport in Cairo and travel to Sharm el Sheikh by bus. Car rental is another popular type of ground transport and is available at both airports.

There are a number of transport options for getting around once you are in the city, with buses and hire car being the favoured services. Information about Sharm el Sheikh's main travel and transport options is shown below. 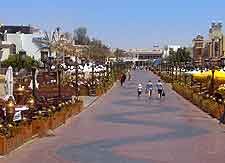 There are shuttle buses offering ground transfers to Naama Bay once you have arrived at the airport. This transport is not scheduled though, so services can be fairly erratic and unreliable. Bus travel is however a cheaper alternative than taking a taxi, so if you are travelling to Sharm el Sheikh on a budget, it may be wise to consider this option. These services are sited next to the terminal building, while more taxi transport can be found outside of the airport. However, these local taxis often tend to exploit tourists and regularly attempt to take them to a hotel where they will receive commission.

Taxis wait outside the main terminal at Sharm el Sheikh Airport, targeting those who have not organised transfers and who are tired after travelling. Taking a taxi can be a very expensive way to travel to your destination, since there are no meters and the drivers frequently charge way over the odds.

If you do not have a courtesy pick up by your hotel, it is possible to arrange a transfer with a local transport company before you arrive. These companies are all familiar with the procedures of flying into Sharm el Sheikh, ensuring that you will not have to queue up with the hoards of other passengers waiting for taxis. You are also more likely to experience a problem-free trip to your hotel when using one of these services. 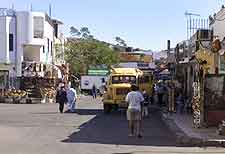 Renting a car can be an extremely economical way to travel around Egypt and Sharm el Sheikh, as fuel prices are very low. To rent a car, you must be at least 25 years old and hold a valid driving licence. Hire car transport companies can be found at the airport or in the resort areas themselves. If you do decide to drive yourself, you must be careful and pay attention at all times, because driving habits in this area are often somewhat erratic and can be dangerous if you are unfamiliar with them. 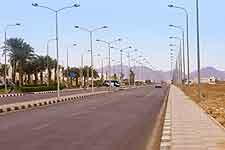 There are a number of bus routes providing travel both in and out of Sharm el Sheikh, linking other cities nationwide. It is important to remember that longer journeys can be extremely uncomfortable.

Sharm el Sheikh offers inexpensive public bus transport, which travels around the city and stops wherever you are. You do however need to make it clear that you want to get on the bus, usually by waving your arms. Let the driver know where you are going and pay the fare according to distance. It is always advisable to have the exact change when using local bus transport, as drivers rarely hand out change. The services are usually comfortable, although they can get rather overcrowded at times.

Sharm el Sheikh does not offer extensive public train transport around the city or to other destinations. There is however one popular route, which travels alongside the Nile. If you choose to take this route, it is recommended that you buy a first-class ticket, since the other classes are often a little cramped and noisy.

Taxi transport is not the best way to travel around central Sharm el Sheikh. Many taxis are expensive and the drivers are renowned for taking people to shops and restaurants where they receive commission - regardless of where the passenger actually wants to go. You are advised to hire a taxi from a designated taxi stand or order one through your hotel, sticking to the blue and white taxis where possible. Always make sure you agree on a price before getting in and if you are unsure how much your journey should cost, ask in your hotel.