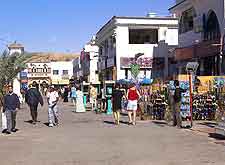 A good range of traditional Egyptian souvenirs can be found around the many shops, bazaars and shopping centres in Sharm el Sheikh. Popular gift ideas available in Sharm el Sheikh include jewellery, leather goods, painted papyruses, postcards, rugs, silk shawls, vases and water pipes (sheesha), to name but a few. Most shops in Sharm el Sheikh really just fall into one of four different categories, jewellery, clothing, perfumes and everything else.

In general, shopping in Sharm el Sheikh is a particularly memorable experience, since most shopkeepers will expect you to haggle and will be rather insulted if you don't join in their little game of negotiation. Many shopkeepers will try every trick in the book to tempt you into their shop, including asking you to sign their guest book, help them write a postcard in English, and translate a letter from a relative - don't be fooled. Just politely say 'No' and walk on, they will not be offended, and just realise that you are wise to their sales tactics. 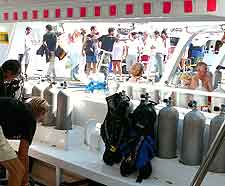 Most of the shops trading in Sharm el Sheikh choose to open between Monday and Thursday and also on Saturday and Sunday, although some shops here do not actually open on Sundays, particularly during the low season.

In the summer, the shopping hours during the daytime are reduced, with shops often taking a break and siesta in the afternoon, and opening later, staying open until as late at 22:00. Shopping hours are similar to this during the religious Ramadan period.

The largest collection of shops and shopping centres in the Sharm el Sheikh area can be found around the tourist hotspot of Na'ama Bay. Shops here stand side-by-side hotels, eateries and nightclubs. The bustling Sharm Old Market is also a great place to hunt out a bargain or two, while for the best value, head south-west to the small town of Dahab, which can be reached in just over an hour by car. The goods for sale in Dahab offer excellent value for money and tend to be much cheaper than their equivalent in central Sharm el Sheikh.

Although dive shops are plentiful around the city, most contain only a fairly basic range of cheap snorkel sets. However, for some really quality diving gear in Sharm el Sheikh, make sure you visit the diving shop on the upper floor of the huge Naama Shopping Centre, which is close to the Hard Rock Cafe and will not disappoint. A word of warning, when shopping in Sharm el Sheikh - do check carefully that any souvenirs you are intending to purchase are not fakes. Papyrus paintings are often overpriced and not original, while leather goods may simply be leather-effect plastic.