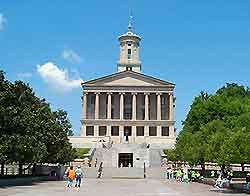 Nashville's historical significance is reflected in its period homes, plantation buildings, impressive landmarks and historical monuments. The two most significant Nashville landmarks are the Tennessee State Capitol building and the Parthenon, the former offering excellent views of Nashville city below and the latter a unique reproduction of the famous Athenian temple.

In keeping with Nashville 's reputation as a musical haven, the Ryman Auditorium has been renovated to its former glory and is still one of Nashville's number one concert halls. While monuments in the town are scarce, there is a tribute to the soldiers who fell in the Vietnam War in the form of a statue that sits adjacent to the Nashville War Memorial Auditorium. 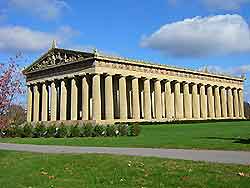 Address: Centennial Park, Nashville, Tennessee TN, USA
Nashville's reputation as the 'Athens of the South' inspired the building of this full-sized reproduction of ancient Greece's most glorious temple, the Parthenon. Complete with an interior sculpture of the goddess Athena and accurate reproductions of the original temple's pediment sculptures, the Parthenon is a delightful addition to Centennial Park and one of Nashville's most impressive landmarks.
Open hours: daily
Admission: free

Address: 301 6th Ave N, Nashville, Tennessee TN, 37243-9014, USA
The plaza steps are home to a statue of a lone solider commemorating those US soldiers who fell in the Vietnam War. Adjacent to the statue is a memorial wall inscribed with the names of veterans. The Nashville War Memorial is a popular place for peaceful demonstrators to gather, while the nearby auditorium holds regular concerts and events.
Open hours: daily
Admission: free 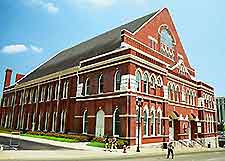 Address: 116 5th Avenue North, Nashville, Tennessee TN, USA
Tel: +1 615 889 3060
Nashville's Ryman Auditorium was originally built as a religious tabernacle and the one-time home of the Grand Ole Opry and the likes of Charlie Chaplin have graced its stage. Having remained closed for many years, the Ryman Auditorium was recently renovated and reopened, and now contains displays on its history and hosts regular musical performances.
Open hours: daily - 08:30 to 16:00, evening performance times vary
Admission: charge, discount for children

Address: 4580 Rachel's Lane, Nashville, Tennessee TN, 37076, USA
Tel: +1 615 889 2941
Former home of President Andrew Jackson, his residence is now open as a museum where you can learn about history from the Jackson era and roam the beautiful gardens and grounds. Once a thriving farm, Nashville's Hermitage property underwent a period of decay in the second half of the 19th century before being restored to its former glory.
Open hours: daily - 09:00 - 17:00
Admission: charge, discount for children and seniors, children under five free 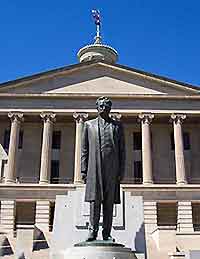 Address: Charlotte Avenue between Sixth and Seventh Avenues, Nashville, Tennessee TN, USA
Tel: +1 615 741 2692
Designed by William Strickland in the Greek Revival style and completed in 1859, the Tennessee State Capitol building was by built by convicts and slaves. One of Nashville's most prominent historic landmarks, the grave of President James K. Polk is located in the grounds, where you can also enjoy amazing views of the city below.
Open hours: Monday to Friday - 09:00 to 16:00
Admission: free

Address: 636 Farrell Parkway, Nashville, Tennessee TN, 37220-1218, USA
Tel: +1 615 832 8197
The one-time home of Judge John Overton, this clapboard house was built in 1799 and later restored. Now containing a museum and host to special events, this historic house transports you back to Nashville life in the 1800s. Also of interest at Travelers' Rest are the beautiful gardens and plantation outbuildings.
Open hours: Monday to Saturday - 10:00 to 16:30, Sunday - 13:00 to 16:30
Admission: charge, discount for children and seniors