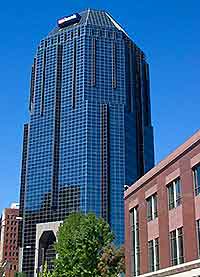 Built on the Cumberland River and named after revolutionary war hero General Francis Nash, Nashville developed into a busy trading point at the start of the 19th century, following the introduction of the steam boat. The city contains over 45 communities and some 15 historic districts, and comprises a series of buzzing entertainment venues, a number of which are based along 2nd Avenue and Broadway.

The Central Business District resides on the northern side of Broadway, along with Capitol Hill and the Bicentennial Mall State Park. Sightseers will find that the main tourist center is the downtown neighborhood of Nashville, while attractions are spread out across the city and its suburbs.

A good place to dine or party, Nashville's eastern district also boasts a golf course, ball fields and fishing, and is home to the Adelphia Coliseum, the stadium where the Tennessee Titans play. 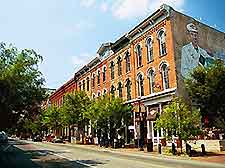 Consisting of mainly modern high-rises and parking lots, the downtown area of Nashville encompasses the central business district and is home to both business and government buildings, as well as an entertainment area located around 2nd Avenue and Broadway. The heart of the business community is situated at Church Street and 4th Avenue. Downtown Nashville boasts attractions such as the Country Music Hall of Fame, the Gaylord Entertainment Center, the Ryman Auditorium and 'The District', where clusters of restaurants, specialty shops and coffee houses can be found, many of which feature live music.

Not really a district, yet virtually a complete town unto itself, Opryland sustained tourism in Nashville for many years with its theme park, prior to its closure in the late 1990s. Encompassing the Grand Old Opry, the city's most important country music venue, and the Opry Hotel and golf course, Opryland offers visitors a unique experience that will give them little reason to leave the complex. Nowadays, the surrounds of the complex have become built up and are home to some of Nashville's most delicious high-end restaurants and also the largest shopping mall in the South, Opry Mills.

Minutes from downtown Nashville, the West End district boasts the Vanderbilt University and is home to the world-famous Music Row, where the US music industry has produced many of its best records. Music enthusiasts visiting this city should take the time to explore the rows of recording studios - nearly every recording label in the US is represented here. West End is known for its selection of excellent restaurants, green university grounds and luxury hotels, while Elliston Place is a trendy neighborhood within the district, where you will find the most happening nightclubs in the city.