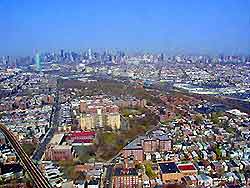 Lying on the eastern side of Nashville, the city's international airport is connected to the city center by Interstate I-40. The airport began its life in the late 1930s and was used as a military base for its first decade, with commercial flights soon beginning.

Today, Nashville International Airport sees monthly passenger numbers close to one million, with notable airlines based here including the likes of American Eagle, Southwest Airlines, United Express and US Airways Express, amongst others.

Address: One Terminal Drive / Briley Parkway / Donelson Pike, Nashville, 37214-4114, Tennessee TN, USA
Tel: +1 615 275 1600
Nashville International Airport stands just 8 miles / 13 km from the downtown district, being reached in approximately 25 minutes by road and located close to the suburbs of Castlewood, Glencliff and Miro Meadows. Nearby places of reference include the Seven Oaks Park, the Ezell Road Park and the Hamilton Creek Metropolitan Park, while further afield and to the west you will find the Trevecca Nazarene University and the Tennessee State Fairgrounds.

Public buses are to be found outside of the main passenger terminal building, where they gather on the ground transportation level. The main bus route is operated by the Metropolitan Transit Authority (MTA). Shared-ride vans and shuttles are also available onsite, being operated by companies such as 24 HR Clarksville, Anytime-Transport, Groome, InShuttle, Jarmon D & Q Transportation and Region-Wide Transit.

Many downtown hotels and motels choose to provide complimentary shuttles for their guests. Participating hotels include those residing on: