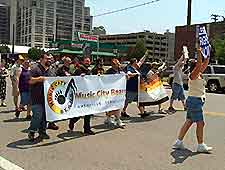 The city of Nashville is amongst the fastest expanding in this part of the United States, with affordable property prices attracting many gay and lesbian couples. It was here in this very city where the acclaimed Tennessee Equality Project was founded in 2004 and this organization continues to successfully campaign against all levels of discrimination.

There is a reasonably small local resident LGBT community present within the city and in general, tolerant is a fairly accurate word to describe the attitudes of most locals, meaning that it would not be realistic to label much of the downtown district as being gay friendly. East Nashville has started to become known for being something of an understated 'gayborhood', although acceptance is certainly becoming more and more prevalent in districts and neighborhoods such as Green Hills, Hillsboro Village, Sylvan Park and West End.

If you are simply looking for somewhere to hang out amongst like-minded people, then Church Street in Midtown Nashville is the place to come. There are a number of tempting coffee shops, bookstores and bars located along this lively stretch, and at night, it is not difficult to find somewhere to party and dance the night away in this part of Nashville. Popular nightspots along Church Street include the likes of Blue Genes, the Canvas Lounge, the Play Dancebar and Vibe, with many of the bars and clubs opening in late afternoon and not closing until almost 03:00 in the morning, throughout the week. 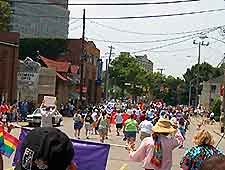 A not-for-profit LGBT festival is held each year in June, following small pride gatherings towards the end of the 1980s. Initially held at Centennial Park, the Nashville Pride celebrations relocated to Riverfront Park in the mid-1990s, when close to 10,000 people were in attendance.

Today, events tend to kick off with a pre-party a couple of days before the principal celebrations get underway. The main draw cards involve live music and performances on twin stages, with headline acts always being a major attraction. In the past, these have included American singer-songwriter Vanessa Carlton, who famously came out on stage here during her performance in 2010, announcing that she was a 'proud bisexual woman'.

Other highlights at Nashville's gay pride include an equality walk, which is organized by the Vanderbilt University and heads along 1st Avenue, all the way to Broadway, roughly following the route of the Cumberland River. More than 100 vendors typically gather at the GLBT Chamber of Commerce Market Place, before Mr. and Mrs. Pride are announced and crowned on the main stage. And of course, when the festivities are over, everyone parties all night long at the clubs on Church Street.