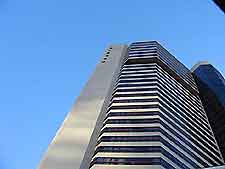 The city of Nashville need not be an expensive destination to visit, and a noticeable concentration of budget hotels and motels reside on the outskirts of the downtown districts, along busy interstates such as the I-40 and the I-65. This budget accommodation comes in the form of the Hampton Inn and the Super 8, amongst many others.

There are also an array of hotels situated close to the Nashville International Airport (BNA), which is just 8 miles / 13 km east of the city. Some of the most popular accommodation lying within easy reach the airport includes the DoubleTree Guest Suites and the Ramada Inn, both of which are to be found on the Atrium Way. 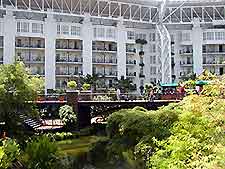 There are a number of very appealing hotels located within the downtown district of Nashville, which are reasonably priced and often close to the Tennessee State Capitol, such as the Best Western Downtown on Union Street. Other well-placed accommodation in downtown includes the Ramada Inn on Broadway, which very much targets business visitors during the week.

Also look out for hotels within districts such as the Music Valley, where the Opryland Hotel on Opryland Drive really does stand out from the crowd and has recently enjoyed an $80 million upgrade. The Fiddlers Inn on the Music Valley Drive is also located within this part of Nashville and is well located for those planning to catch a show at the famous Grand Ole Opry.

If you are looking for Nashville lodging close to the Vanderbilt University, on the southwesterly side of the city, (not to be confused with the Tennessee State University to the north), then the West End Lodge on West End Avenue is a good bet. The West End Avenue lies within the West End district of Nashville and is well-placed for access to the Music Row, with the Marriott Vanderbilt also standing here and next to the Centennial Park. Other reliable accommodation neighboring the university campus includes the Hampton Inn and Suites on Elliston Place, which lies just a stroll away from the Centennial Sportsplex, where two large ice skating rinks are available throughout the year. 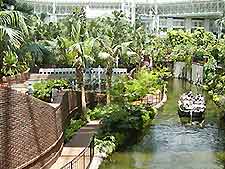 For a spot of luxury accommodation in Nashville, consider splashing out on a room or suite at the Hermitage Hotel on 6th Street North, near to the Tennessee State Museum, which ranks amongst the finest available in the whole of the city. Four-star hotels in Nashville really are surprisingly affordable and often just slightly more expensive than lodging falling within the mid-range category.

Situated on Broadway, the Union Station Wyndham Historic Hotel is a stunning landmark building in its own right, being a converted train station dating back to the very end of the 19th century and dominated by a distinctive clock tower. A little more pricey than other four-star accommodation, although equally enticing, is the Loews Vanderbilt Nashville Hotel on West End Avenue, where impressive city views come as standard.