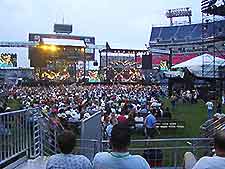 With its reputation as the country music capital of the US, many of Nashville's festivals and events are musical. There are countless musical performances in Nashville around the year, with different artists giving concerts several nights of the week and the main focus being on country, folk and bluegrass music.

Check out the ticket offices at B. B. Kings, the Country Music Hall of Fame and the Ryman Auditorium for performances during your visit to Nashville. Other top events during the Nashville calendar include Independence Day celebrations and the Tennessee State Fair. There is always a good selection of things to do in Nashville.