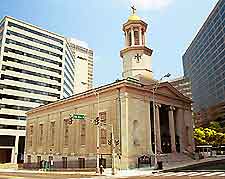 Nashville contains more than 1,000 churches and religious buildings, most of which are Protestant, although there are also a number of Roman Catholic churches and Jewish synagogues present in Nashville.

Address: 319 Fifteenth Avenue, Nashville, Tennessee TN, USA
Tel: +1 615 329 2082
The Capers Memorial CME Church can be found on the important National Register of Historic Places and dates back to the 1830s, making it the oldest church of its kind in Nashville.

Address: 900 James Robertson Parkway, Nashville, Tennessee TN, USA
Tel: +1 615 255 8757
Nashville's historic First Baptist Church dates back to the mid-19th century and was an important black church for many years, before the Capitol Hill area was redeveloped in the mid-20th century.

Address: 2717 West Heiman Street, Nashville, Tennessee TN, USA
Tel: +1 615 329 1625
The House of God Church stands on Nashville's West Heiman Street and is known for its large summer convention, which has been held since the early 1900s.