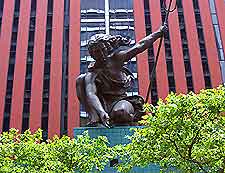 Portland has a comparatively short yet fascinating history. Originally settled by the Clackamas and Multnomah Native Indian tribes as early as the 1830s, the area first saw European settlers arrive with the Lewis and Clarke trans-continental expedition, in 1806.

The site of modern-day Portland was initially a clearing made as a rest stop for traders traveling between Fort Vancouver and Oregon City.

In 1845, two men by the name of Francis Pettygrove and Amos Lovejoy developed a small town from the original traders' spot. They named the town Stump-town, but four years on it assumed the name Portland after Francis Pettygrove's home settlement in Maine.


Today, visitors can see where the city was founded in the Old Town. This is where the most significant and the oldest structures in the city sit. For more information about Portland history and its Stump-town heritage, visit the Oregon Historical Society on SW Park Avenue.

By the 1850s, there were several important industries operating in Portland. Logging was one of the first major industries in the area, and the city boasted a log cabin hotel, a steam sawmill and a post office. The fact that the city, which in 1851 was incorporated, rested on the Columbia River certainly assisted with trade, offering good connections to San Francisco to the far south. The fishing, the wheat agriculture and the timber industries thrived as a result of the sheer convenience of the city's transportation.

With the railway arrival in the 1880s, Portland continued to expand and grow. At one point, the city was the largest settlement in the Northwestern United States, behind San Francisco. This was until the railroad reached Washington State to the north, causing Seattle to subsequently boom.

Attracting the Masses - The 20th century

At the start of the 20th century, Portland was slowly being overtaken by Seattle as the largest city in the Pacific Northwest. However, Portland succeeded in creating a more entertaining and appealing destination for travelers during this time and its population doubled in just a few years.

The Lewis and Clark Centennial Exposition of 1905, the Oaks Amusement Park and Council Crest Park, the site of another amusement park, all opened and began attracting thousands annually. Oaks Park, also established in 1905, can still be visited today. Developed to accompany the 1905 Exposition, this landmark from Portland's turn-of-the-last-century history drew 300,000 visitors alone in its opening season, while the expo itself saw total visitor numbers top 2.5 million.

During WWII, Portland was used as a battleship docking station and a ship manufacturing plant. This was largely due to its secure but easily accessible location along the Columbia River, close to the Pacific coast. The 1960s and 1970s saw Portland focus more on improvements to the city itself, rather than industrial development, with the authorities implementing significant environmental planning and urban projects aimed at boosting its overall beauty.

A number of stunning parks can be seen throughout the city today as a result, including the famous downtown Tom McCall Waterfront Park, which was once actually a four-lane freeway.