Getting Around, Portland Travel, Transport and Car Rental 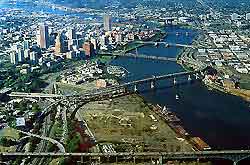 The public transport system in Portland is well organized, with Tri-Met buses and a light rail system providing free travel within the downtown area, and extremely affordable transport beyond. Although renting a car is a good idea if you plan to explore Portland's outlying areas, downtown tends to be congested and tricky to navigate by car and many residents choose bicycles as an easier and more environmentally friendly travel option.

Portland International Airport is located within easy driving distance from the central city area at just 9 miles / 14 km northeast of downtown. The airport provides connections to virtually all major airports in the US and also serves flights to and from Japan, Canada and Germany. Taxis are freely available from outside the terminal building, but a far cheaper way of reaching the city centre is by taking advantage of the MAX light rail system. For further information, please refer to the Portland Airport page.

If you are planning on traveling to Portland's outlying suburbs and regional attractions, hiring a car is essential. If you rent a car from Portland International Airport, the easiest route to downtown is to travel along I-205 south to I-84 west. From the interchange of the two highways, follow the signs for the City Centre over the Morrison Bridge and travel into downtown. Interstate I-5 leads directly through downtown and on to California (south) and Washington (north), while the I-84 leads into Portland from the east and Highway US-26 approaches the city from the west. Renting a car can be a particularly inexpensive way to travel around Oregon, with many firms offering discounts for car hire of three days and over, and also when booked directly on the Internet.

Tri-Met buses serve the central city area and outlying suburbs and are free within the downtown area. Greyhound buses regularly travel up and down I-5 and along I-84, connecting Portland with other major US cities as well as with Vancouver, Canada. Green Tortoise buses provide transport to destinations along the Pacific coast. 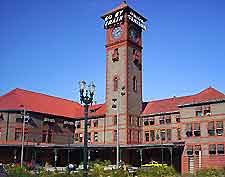 Union Station is located on NW Sixth Avenue slightly north of downtown and adjacent to the Greyhound bus station and is easily accessible via the Tri-Met bus system. Amtrak trains travel all the way up the west coast, with two trains running between Eugene and Portland each day and three daily trains connecting Seattle. The Coast Starlight runs daily along the west coast, making stops at Seattle, Portland, San Francisco, Bay Area and Los Angeles, but if you plan on taking this travel option be aware that the Starlight is regularly delayed en route. The Empire Builder provides daily transportation eastwards and travels via the scenic Columbia River Gorge.

Portland is renowned for its award winning and environmentally friendly mass transit system which includes the Tri-Met buses, the Metropolitan Area Express (MAX) light rail system and the Streetcar. The Streetcar system provides affordable travel to the Cultural District, Pearl District, Northwest / Nob Hill neighborhood and Portland State University, while the MAX light rail system links various points through the metropolitan area. Fares for Tri-Met and the Streetcar are interchangeable and all public transport is free within the 'Fareless Square' downtown area.

With the extensive transport options offered by the Tri-Met buses, MAX light rail system and Portland Streetcar, there is not a great deal of demand for taxi transport in the city. Taxis are available from the airport and within the center of the city, but are far more expensive than taking public transport.