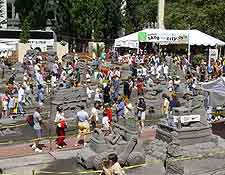 Portland does not have as many calendar events and festivals as some of America's larger cities, however, there is never a shortage of things to do, with the summertime in particular offering a range of music orientated occasions. The helpful tourist information offices in Portland are always a useful source for current events and festivals in Portland.