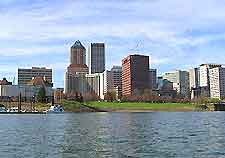 A large percentage of the accommodation in Portland is to be found within the downtown district or Northeast neighborhood, being within close proximity to the Lloyd district and also the Oregon Convention Center on the Northeast ML King Boulevard. Hotels with a view of the Portland skyline and the Willamette River are especially desirable.

There are also a number of hotels within easy reach of the Portland International Airport (PDX), which is only 10 miles / 16 km from the city center and next to the Government Island State Park. For accommodation close to the city's airport, look along the Northeast Airport Way (Interstate I-205 exit 24), where there are many cheap chain motels and similar budget lodging options awaiting. Located on the Northeast Airport Way are brands such as the Comfort Suites, the Courtyard by Marriott, the Fairfield Inn by Marriott, the Hampton Inn, the Hilton Garden Inn, the Holiday Inn Express and the Sheraton, amongst many others. 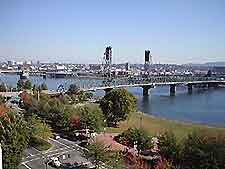 Budget accommodation in the city comes in many different guises. Backpackers often favor the cheap and friendly lodging available at the HI Portland Hawthorne Hostel on the Southeast Hawthorne Boulevard, as well as the rather quieter HI Northwest Hostel standing on the corner of Northwest 18th Avenue and Northwest Glisan Street. There are also a number of very affordable Portland hotels lining roads such as North Broadway, the North Hayden Meadows Drive and the Southwest Barbur Boulevard. If you prefer to camp, then there is a recommended camping site to be found at Oxbow Park, in the neighboring city of Gresham.

Hotels falling within the mid-range lodging category are certainly widespread in Portland, although drivers should note that most downtown accommodation comes with valet parking only. Several hotels stand out as being good value for money, and these include the Red Lion Portland Convention Center on the Northeast Grand Avenue, and the Crowne Plaza Downtown Convention Center on Northeast 2nd Avenue, which resides within the Lloyd Business District. 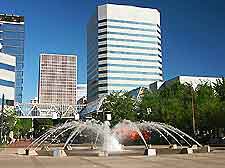 Also competitively priced is the Four Points by Sheraton Portland Hotel on the Northeast 181st Avenue, and the Marriott Downtown Waterfront, which boasts impressive views of the Willamette River and Mount Hood, and is situated just across from the Tom McCall Waterfront Park. Southwest Broadway, Southwest 11th Avenue and Southwest 6th Avenue are also known for their plentiful mid-range hotels.

For luxury accommodation in Portland, the city's four-star hotels are really quite appealing. In particular, look out for the Riverplace Hotel on Harbor Way, or the centrally located Hotel Lucia on Southwest Broadway, in the very heart of the downtown area.

Close by and also standing on Southwest Broadway is the Heathman Hotel, which is renowned for its exceptional service and restaurant, and even has its own library and live jazz music. On Southwest 15th Avenue, the Hotel Deluxe is within Portland's enticing Pearl district and conveniently right next to the MAX light railway, while the Benson on Broadway is celebrates its history, being built in 1912 and favored by visiting celebrities and politicians.