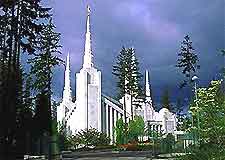 Portland contains a good concentration of churches, many of which stand in the city center and provide much character to the city.

Located within central Portland, St. Mary's Cathedral of the Immaculate Conception serves as the city's seat for the Roman Catholic Archdiocese and was opened in 1926, being built in under a year and boasting some huge stained-glass windows, depicting subjects such as the Four Evangelists (West Transept) and the Blessed Virgin (East Transept Window).

The Assumption Catholic Church is another attractive religious building and stands within the cathedral park neighborhood, where it is just a block away from the Roosevelt High School and George Park, and right next to the Assumption School.

Address: 1716 Northwest Davis Street, Portland, 97209, Oregon (OR), USA
Tel: +1 503 228 4397
St. Mary's Cathedral is a red-brick building sitting on the western side of downtown Portland, where it was built at the request of Archbishop Alexander Christie. The cathedral comes with many exquisite details, such as a marble floor within the apse, marble statues (originating from Switzerland) and regular catholic masses, held every day at 07:30 and again at 17:30. Further masses take place on Sundays at 09:00 and 11:00. As part of the city's 150th anniversary celebrations, the cathedral enjoyed extensive restoration work.
Open hours: daily

Address: 7406 North Smith Street, Portland, 97203, Oregon (OR), USA
Tel: +1 503 286 0203
The Assumption Catholic Church is situated on the northwestern side of the city and is one of the area's most beautiful buildings. Head of the Catholic religion in Portland, attractions at the cathedral include a vast interior, well-preserved period features, intricate stained-glass windows, an impressive bell tower, a large church pipe organ, regular Sunday masses and a number of seasonal events.
Open hours: hours vary

Address: 1126 Southwest Park Avenue, Portland, 97205, Oregon (OR), USA
Tel: +1 503 228 7219
The First Congregational Church is located in the downtown district, close to many popular tourist attractions. Known for its magnificent Gothic-style architecture, the interior is worth investigating.
Open hours: Monday to Friday - 09:00 to 12:30

Address: 1816 Northwest Irving Street, Portland, 97209, Oregon (OR), USA
Tel: +1 503 226 3659
The First Immanuel Lutheran Church stands on the northwestern side of the city, within the Nob Hill area and close to Couch Park. Dating back more than 100 years, the First Immanuel is a particularly attractive building, featuring a tall steeple. The pavement at the front features a row of small trees, while there is also a colourful flower bed by the entrance.
Open hours: Sunday - from 10:00

Address: 1011 Southwest 12th Avenue, Portland, 97205, Oregon (OR), USA
Tel: +1 503 228 6389
The First Unitarian Church is one of Oregon's oldest, dating back to the mid-19th century and boasting imposing stone pillars, grand windows and historic features. This is an attractive red-brick building with on-road parking being available directly outside.
Open hours: hours vary

Address: 1422 Southwest 11th Avenue, Portland, 97201, Oregon (OR), USA
Tel: +1 503 222 2031
The Old Church is actually the most historic still standing in Oregon today and also goes by the name of the Calvary Presbyterian Church, coming with impressive Gothic-style architecture and tremendous attention to detail. Other attractions include a large pipe organ, regular concerts and self-guided tours.
Open hours: Monday to Friday - 11:00 to 15:00