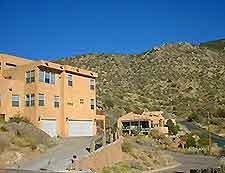 The history of Albuquerque, founded in the early 1700s, is Spanish in origin, with the area first settled as a colonial outpost on the Rio Grande.

It made the perfect stop-off on the continued expansion west, with its fertile lands and dry air, and was later incorporated into the legendary Route 66.

Native Americans farmed the lush valley before European settlers took over the land. The Spanish were here first, founding the city in 1706 and naming it after the Duke of Albuquerque. The founders were taken by its location on the Rio Grande and its excellent soil. The Old Town, featuring a plaza encircled by noteworthy buildings, as well as a church and homes, was erected in traditional Spanish village style. This landmark construction in Albuquerque history remains preserved today.

The railroad made it to Albuquerque by the 1880s and a 'new town' was quickly established alongside the tracks. This area outpaced the Old Town, becoming a center of commerce for New Mexico and serving as the downtown of today. Both towns eventually merged into one, connected by electric trams. Although essentially an outpost at this point in Albuquerque history, the city was very much part of the American empire. Many folk would come here to escape the east for the fresh, dry air of the west, especially tuberculosis sufferers, while gold prospectors and merchants came in droves.

Albuquerque's biggest boon in history was the incorporation of Route 66 right through the town in the 1920s. It consisted of the group of highways from Chicago to Los Angeles, labeled the 'Mother Road' and making up a section of the Transcontinental Highway. The route was completed in 1926 and went right through the town (now Central Avenue), bringing thousands of new visitors and leading to shops, restaurants and motels opening. The route is still in place as one of the American automotive icons.

Various military bases were also set up here in the 1930s and '40s, in the atomic age, including both the Kirtland Air Force Base and the Sandia Base. These bases brought in massive investment and thousands of personnel. 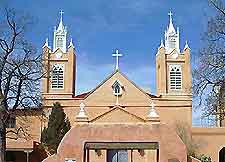 The city spread fast in the 1960s and '70s, while the downtown core and Old Town fell into neglect, with many historic structures in Albuquerque being flattened to make way for malls and skyscrapers. However, effort has been made of late to restore some of these buildings, including the KiMo Theater. Of note, this Pueblo Deco theatre is now a major landmark and performing arts venue.

Other sites worth seeing include the Victorian Bottger Koch Mansion (currently a bed and breakfast) on San Felipe Street Northwest; the Coronado State Monument on Kuaua Road - featuring the ruins of Kuaua village, the Petroglyph National Monument - with its impressive ancient rock carvings, and the Pueblo Missions National Monument.

Although Santa Fe is the state capital of New Mexico, Albuquerque is today a major hub, with a huge urban area and a population in the region of half a million. It also boasts New Mexico's principal university.