The city's airport began its life as one of two and served the region during the 1930s. Towards the end of that decade, it was announced that a new, bigger single facility would be built and the year of 1937 saw the official arrival of the Albuquerque Municipal Airport, now better known as the city's International Sunport.

Over the years, the number of flights and passengers steadily grew and today, just under 600,000 passengers arrive and depart from here each month. Not only does the airport serve Albuquerque, but it also partly services Santa Fe, with frequent Rail Runner trains connecting a number of onward destinations. 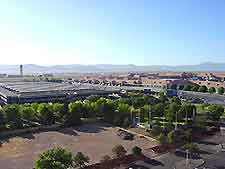 Address: 2200 Sunport Boulevard Southeast, Albuquerque, New Mexico NM, 87106, USA
Tel: +1 505 244 7700
The city's international airport stands around 4 miles / 6.5 km to the southeast of the downtown district and resides alongside the Championship Golf Course and Yale Village, and close to both the USS Bullhead Memorial Park and the Central New Mexico College.

Albuquerque Airport is just a short drive from the city center and the journey is clearly signposted. Lasting around ten minutes in good traffic conditions, the airport is next to the Sunport Boulevard, which in turn leads on to the I-25 Interstate (Pan American Freeway). Nearby places of interest include Rio Rancho, the Shooting Range State Park and the El Cerro-Monterey Park.

Bus travel to and from the airport is provided by a local transit system known simply as ABQ Ride, with further bus and coach companies providing longer distance connections to nearby towns and cities. Popular destinations include the Alvarado Transportation Centre, Encinco House, the Martin Luther King Boulevard, the University of New Mexico and the Avenida Cesar Chavez.

Charter services come in the form of American Tours, Herrera Coaches, Paradise Tours and Roadrunner Shuttles, as well as Tours of the Southwest and the Twin Hearts Express, the latter of which runs between Espanola, Rio Costilla, Questa, Taos and Southern Colorado as a whole.

Taxi ranks can be found outside the airport and offer a convenient and relatively inexpensive journey into the nearby city center. Resident local taxi companies include both the ABQ Green Cab Company (tel: +1 505 243 6800) and the Yellow Cab Company (+1 505 247 8888).

Five luxury limousine companies operate at Albuquerque Airport throughout the day and night, and can be leased per hour or day. Notable limo companies available include American, Star and Carey Southwest.