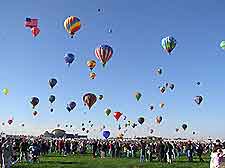 Albuquerque is certainly not a city where you will struggle to find things to do. The city holds plenty of lively annual events and summer festivals, celebrating its strong international influences in the areas of food, music and art.

Artisans and craftsmen showcase local art throughout the year at the numerous arts-based events, while there are also several sporting festivals held around the city's magnificent countryside.

Many people now choose to visit Albuquerque in October, since this is when the enormous balloon fiesta takes place. This yearly balloon fiesta began its life in the early 1970s and now lasts just over a week, drawing up to 100,000 spectators per day and boasting mass ascensions featuring literally hundreds of balloons, along with night glows, a 'special shape' rodeo, racing events, piloting skills and other related challenges.