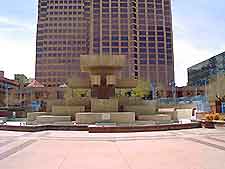 The price of accommodation in Albuquerque is very much geared towards demand, and since May through September marks the high season, this tends to be when hotels are at their most expensive. However, lodging rates in Albuquerque are also known to rise when major events take place in the city, and with just under one million spectators arriving to watch the famous International Balloon Fiesta in early October, the demand for hotels certainly peaks at this time.

There is a selection of affordable accommodation located close to the Albuquerque International Airport (ABQ), which is just 4 miles / 6.5 km southeast of the city center and next to the suburbs of Southeast Heights, Victory Hills and Yale Village. Popular airport hotels are to be found on Sunport Place (Holiday Inn, Homewood Suites, Hyatt Place and Staybridge Suites), on Center Avenue Southeast (Days Inn, Fairfield Inn and Towneplace Suites by Marriott), and on the South Yale Boulevard (Courtyard by Marriott, Hampton Inn, Hilton Garden Inn, Holiday Inn Express Suites and La Quinta Inn). 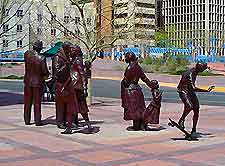 If you are looking for mid-range accommodation and lodging in Albuquerque, then three-star hotels will likely suit your needs, with some appealing options being found around the Louisiana Boulevard, the Rio Grand Boulevard Northwest and the San Antonio Boulevard. Look out for the Albuquerque Marriott Hotel on the Louisiana Boulevard Northeast, which has just enjoyed an expensive renovation and is surrounded by shops and restaurants, whilst boasting views of the Sandia Mountains.

At the Hotel Albuquerque on the Rio Grand Boulevard Northwest, several quality attractions are little more than a block away, such as the New Mexico Museum of Natural History and Science. On Central Avenue Northwest, the highly regarded boutique-style Hotel Blue comes with a complimentary shuttle service, while the Radisson on Carlisle Boulevard Northeast is well-placed if you are planning to visit the Rio Grande Zoo or the Indian Plaza Shopping Center.

Luxury hotels in Albuquerque are generally concentrated around the Marquette Avenue Northwest and the Tijeras Avenue Northwest, where upmarket accommodation comes in the form of the Hyatt Regency, which is only a stroll away from the Albuquerque Convention Center. On the Louisiana Boulevard Northeast, the Sheraton Uptown Hotel is an imposing four-star complex, with almost 300 guest rooms and a convenient location within the recently redeveloped Uptown area, being near to the Encantada Square Shopping Center and the Coronado Mall.