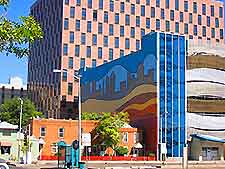 Famed for its cultural diversity, the city boasts many museums, galleries and restaurants that reflect the city's multicultural identity. The distinct neighborhoods and districts of this large city offer visitors to Albuquerque a myriad of activities ranging from skiing, golfing and trekking to shopping, dining and sightseeing. Here are Albuquerque's main districts and locations. 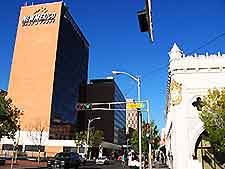 Downtown Albuquerque is the bustling business heart of the city and its Civic Plaza is one of downtown's main al fresco venues, hosting many important Albuquerque events, including the Summerfest. The Downtown district of Albuquerque is also home to the KiMo Theater and some of the city's luxury hotels.

Blessed with magnificent scenery, this district makes for a great escape from urban life and the natural surroundings make a range of outdoor activities possible. Albuquerque's East Mountain district is home to the Sandia Peak Ski Area.

Boasting an eclectic mix of glorious architecture from Art Deco to Spanish Colonial, this rejuvenated area is now one of Albuquerque's hippest hotspots. Once a run-down business district, Albuquerque's Nob Hill / University District has been transformed into a place that's brimming with quirky shops, galleries, restaurants, cafés, clubs and coffee houses. The area near the university is also home to a number of restaurants and delis offering international cuisine. 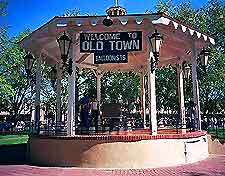 Albuquerque's Old Town district is the picturesque historic center of the city. Life here revolves around the Old Town Plaza and the Church of San Felipe de Neri, the first building to be built on the square. The Old Town district is a pleasant place to while away the hours in Albuquerque, with its Pueblo-Spanish architecture, many shops, galleries and restaurants. The Old Town is also home to tourist attractions including the New Mexico Museum of Natural History and the Explora! Science Center.

The south Rio Grande Valley is home to some beautiful old homes and numerous visitor attractions, including the Rio Grande Zoological Park, Albuquerque Aquarium and Rio Grande Botanic Gardens. In the North Valley there are opportunities to ride horses along the river and visit the Anderson Vineyard.

Home to two large shopping malls and many shops, Albuquerque's Uptown District is principally regarded as a shopping and business district. The area boasts an array of eateries to serve local business people and shoppers alike.