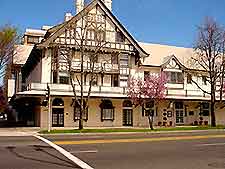 Although Sacramento may not be situated next to the famous Californian coastline, it is no more than two hours away from San Francisco and very much a tourist destination in its own right, with plenty of accommodation to match its popularity. Sacramento hotels are particularly in demand during the summer months, although the presence of much chain lodging and familiar brands ensures that prices are quite competitive.

If you are a budget traveler looking for suitable accommodation, then the HI Sacramento Hostel on H Street is an especially good bet, with elegant Victorian architecture and a convenient setting near to the historic Old Sacramento area and the riverfront. Alternatively, consider staying at one of the city's cheap hotels or motels, such as the Econo Lodge on 16th Street, which is fairly basic and central. 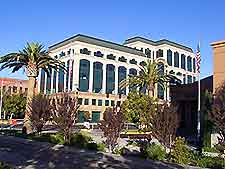 If you are flying into this part of California, then you may well like to stay at a hotel close to Sacramento International Airport (SMF), which is just 12 miles / 19 km to the northwest and near to the Elkhorn Regional Park. Around 3 miles / 5 km away from the airport is the four-star Homewood Suites by Hilton, and the three-star Four Points by Sheraton, while many other hotels come with complimentary airport shuttles as standard.

The majority of the mid-range accommodation in the city is based around downtown Sacramento, where popular hotel chains include the likes of Best Western, Clarion, Holiday Inn, Quality Inn and Ramada, amongst others. For something quite out of the ordinary, you may like to stay at the Delta King Hotel off Front Street, which is actually a large floating riverboat permanently moored within Old Sacramento and approximately 1 mile / 1.5 km from the State Capitol Building. With 44 guest rooms spread over five floors, the Delta King dates from the late 1920s and also boasts an award-winning restaurant named the 'Pilothouse', as well as its own theater known as the Capital Stage. 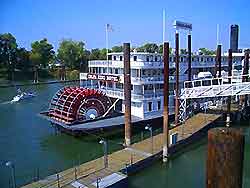 If you are visiting Sacramento to attend a sports event or concert at the ARCO Arena on the Sports Parkway, then the nearby Holiday Inn Express Suites on Advantage Way is particularly suitable and regularly booked up when a major soccer match or basketball game is taking place.

If you prefer luxury accommodation, then you will find that a selection stand along Front Street, L Street and J Street, the latter being where the Sheraton Grand Sacramento Hotel is situated, occupying a restored Public Market Building and just a short stroll away from the Convention Center on L Street. Located on the Capital Mall and next to the Sacramento River is the Embassy Suites Hotel, which stands close to the California Governor's Mansion.

Sited next to the downtown attractions and local businesses is the four-star Sterlin Hotel on H Street, which boasts stylish 1890s architecture, period furnishings and lodging, and a magnificent ballroom, where wedding receptions are often hosted.