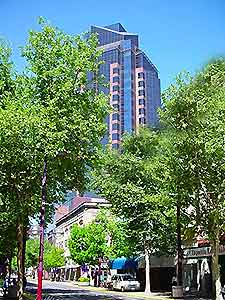 The capital of California is surrounded by rivers and dikes, with this city being split into three parts - Downtown, Midtown and East districts. Old Sacramento is sandwiched between downtown and the Sacramento River.

Sacramento is a typical American city because, like many US cities, it was constructed on a grid pattern, with east and west streets marked with letters and north and south streets numbered.

M Street is an exception to this rule and has been given Capitol Street status due to it hosting the Capitol building, while Front Street received naming status due to its location fronting the river an the western end of downtown. Front Street is also part of Old Sacramento, which is awash with museums, shops and cobbled streets. 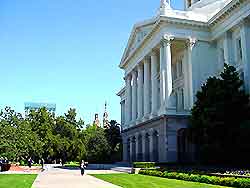 The Capitol Area is an interesting and historic 20-block area that is ideal for strolling and discovering local history. Capitol Park is the focus of the area, surrounded as it is by pretty Victorian buildings and shops, while the beautiful landscaping here ensures quiet respite from the city. The Vietnam Veterans' Memorial is the main focus of the park, with Stanford Mansion and Capital Mall also being highlights.

Known as Uptown, North Sacramento is located across the east-west running American River and is centered on Del Paso Boulevard. This is a fairly old neighborhood and it is loaded with impressive galleries including the large Michael Himovitz Gallery. Over the years Uptown has transformed itself into a smart area, with numerous fine restaurants and shops located here. The popular Arden Fair Mall is just to the east of this district. 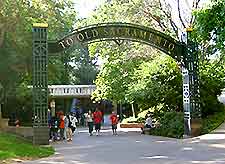 Located between the river and I-5, Old Sacramento is a restored neighborhood and historic district, with numerous quality attractions and shops, trendy cafés and restaurants, pubs and clubs and even a theater, with many of the buildings having been built in attractive stone. Not far from Old Sacramento is downtown, centered on the open-air Downtown Plaza shopping mall. There are shops galore here and the ubiquitous jugglers and musicians that congregate here keep visitors entertained.

Lying within the capitol area, the Victorian Houses district is located on Seventh to Sixteenth streets and from E to I streets, where it is made up of quaint tree-lined avenues. This charming neighborhood is a fitting tribute to this historic state capital.