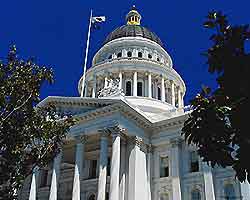 As Sacramento is a fairly historic city, you should not be surprised to find an abundance of attractive old homes, mansions and landmarks that have been lovingly restored to their former glory. Central among these are the Governor's Mansion, the first house in California to have an indoor bathroom, and the Sacramento State Capitol Building, with its massive rotunda and rich interior.

Other notable landmarks of interest include the Historic Old Sacramento City Cemetery, where many of Sacramento's former residents are buried, while steam train tours that snake along the river from the Central Pacific Passenger Depot are popular.

Address: 1526 H Street, Sacramento, California CA, USA
Tel: +1 916 323 3047
Built in 1877, the Governor's Mansion in Sacramento is a 15-room house and was one of the first homes to have an indoor bathroom in California. The one-time home of Ronald Reagan and later home to some of California's chief executives until 1967, the house boasts seven marble fireplaces, each of which has a petticoat mirror so that ladies could quickly check their slips.
Open hours: daily - 10:00 to 16:00
Admission: charge 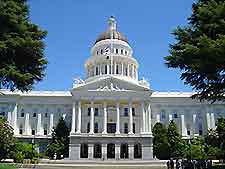 Address: Capitol Mall, 10th and L Streets, Sacramento, California CA, 95814, USA
Tel: +1 916 324 0333
Built in 1869, the California State Capitol is one of the city's most impressive landmarks. The building contains an elaborately decorated 120-foot / 36-meter high rotunda and an opulent interior featuring a marble floor, massive staircases and a profusion of chandeliers. Also inside are replicas of legislative chambers and state offices built in a decor reminiscent of the late 19th century. There are regular guided tours of the Sacramento State Capitol Building, after which you can explore the huge Capitol Park, where the California Vietnam Veterans Memorial resides along with an abundance of camellias, Sacramento's city flower.
Open hours: daily - 09:00 to 16:00
Admission: free

Address: 930 Front Street, Sacramento, California CA, USA
Tel: +1 916 445 6645
The highlight of this reconstructed 1876 station is the steam-powered train that departs hourly. The train runs from the freight depot and loops along the Sacramento riverfront, a delightful 40-minute journey. Trains run from April through to September.
Open hours: daily - 10:00 to 17:00, seasonal variations apply
Admission: charge

Address: Entrance on Broadway at 10th Street, Sacramento, California CA, USA
Tel: +1 916 264 5621
Guided tours of Sacramento's most famous cemetery are available between March and November. This historic cemetery was established back in the mid-19th century and is the final resting place of some of Sacramento's most notable characters including Sacramento's founder, John Augustus Sutter and thousands of other former residents. The grounds of Sacramento Cemetery are well kept and some of the graves sport elaborately carved wooden headboards.
Open hours: daily
Admission: free