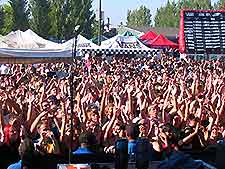 Sacramento offers something a little different to other major cities in the US, with its selection of popular and unique homegrown festivals and events.

Summer is the busiest time in Sacramento, with jazz concerts, open-air activities and celebrations of the gold rush days, as well as arts festivals and the exciting Music Circus. Perhaps the greatest celebration in the city is the Jazz Jubilee towards the end of May, which is the second-biggest of its kind in the world and is full of things to do, see and enjoy.

The Jazz Jubilee takes place each year over the Memorial Day weekend and was first held in the early 1970s, becoming something of a giant party. Jazz and blues concerts are staged at venues such as the Delta King Paddlewheel Saloon, the Embassy Suites Ballroom, the Firehouse Courtyard, the Hyatt Ballroom and the Sheraton Grand Nave Ballroom, while the floating Delta King Dock also offers live music and plenty of dining.