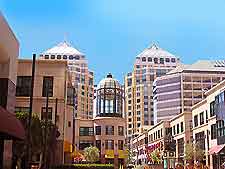 Oakland International is one of three airports located within the San Francisco Bay Area. This busy facility in the southeastern suburbs of Oakland city handles approaching 10 million passengers a year, offering regular, daily domestic flights to many US cities and a few regional international flights to Mexico. Its major carriers, which use the city as a crew base, are Southwest and Allegiant Air. Alaska Airways also has a strong presence at the facility, along with its subsidiary, Horizon Air.

Many travelers, particularly those on business trips, prefer to use Oakland International Airport over the region's main air hub, San Francisco International Airport, as this smaller facility is well-known for its high percentage of on-time arrivals. The airport first opened in 1927 and has a place in aviation history due to Charles Lindberg's participation in its opening ceremony. During WWII, the complex became a Naval Air Station and played a vital part as a departure hub for the US military during the Vietnam War.

The facility has two terminals and is served by 16 airlines which offer routes to all major US cities, as well as to Mexico City, Guadalajara, Amsterdam, Honolulu and several other popular Hawaiian holiday destinations. Charter flights and general aviation are also served here, with the most popular destinations including Los Angeles, Seattle, Las Vegas, Phoenix and Burbank.

Address: 1 Airport Drive, Oakland, California CA, 94621, USA
Tel: +1 510 563 3300
Oakland International Airport is situated adjacent to the I-880 interstate (Nimitz Freeway), some 12 miles / 19 km from the city's Central Business District. The site stands close by Alameda, Brookfield Village, Mulford Gardens and San Leandro, and next to the Oyster Bay Regional Shoreline park. Of note, the fast road system in and around San Francisco Bay is well-signposted and easy to navigate.

Oakland city center is accessed via the Airport Drive, which leads to Hegenberger Road and on to the city center via the I-880. The route is well signed and passes by the Coliseum Industrial Complex, San Leandro Bay, the neighborhoods of South Kennedy Tract and North Kennedy Tract, Hawthorne, East Peralta and the Jack London District. Except in rush hours and on holidays, the journey should take around 35 minutes or thereabouts.

Public rail company Bay Area Rapid Transit (BART) offers a regular train service to Oakland city center and beyond from its Coliseum-Oakland Airport station, just off the complex. The station is linked to the terminals by a frequent shuttle bus.