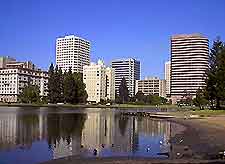 Oakland and the general East Bay area of California offer a wealth of affordable accommodation, with hotels to suit all kinds of travelers. Many people choose to stay here due to the city's proximity to nearby San Francisco, which is just 12 miles / 19 km away and connected by the famous Bay Bridge. Hotels in Oakland tend to provide far better value for money than similar lodging in San Francisco, being well placed for excursions into this metropolis.

Hotels are very much centered in the downtown and Chinatown areas, while accommodation is also situated along the waterfront, around the Jack London Square, in the North Oakland district and throughout the West Oakland neighborhood.

Further hotels in the Oakland area can be found in neighboring Californian towns and cities, such as:

A reasonable choice of accommodation is close to the Oakland International Airport (OAK), which is situated some 12 miles / 19 km to the south, alongside the Brookfield Village and the San Leandro Bay. 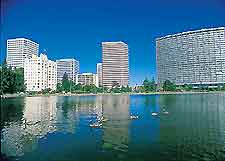 Bed and breakfasts in Oakland often provide exceptional value, particularly around nearby Berkeley's scenic hills. Budget hotels are concentrated along 7th and 10th Streets, Edes Avenue, Embarcadero, Enterprise Way and Hegenberger Road. This accommodation comes in the form of various chains, such as the Best Western Inn at the Square, the Clarion Hotel, the Courtyard Oak Downtown, the Hilton, the Howard Johnson Oakland Bay and the Quality Inn. Several camping grounds are also available during the summer months, with some of the nearest being based at the Anthony Chabot Regional Park, the Del Valle Regional Park, the Redwood Regional Park and the Sunol Regional Wilderness Park.

Oakland's Jack London Square is situated on the waterfront and features a large number of surrounding hotels and stores. This is a popular area to look for lodging and being in the heart of downtown Oakland, accommodation is close to amenities, and attractions. A number of other notable hotels are located near to Lake Merritt and boast impressive waterfront views.

Mid-range hotels in Oakland can be found around the Broadway, the Embarcadero, 3rd Street and Washington Street. Notable three-star accommodation includes the historic Washington Inn on 10th Street, which stands in the heart of Old Oakland and just a couple of blocks from Lafayette Square. Close by is the Marriott City Center on Broadway, while on Washington Street and next to the Jack London Square is the Waterfront Hotel (Joie De Vivre), where stunning views of the Inner Harbor are to be expected.