Oakland's situation on the western coast of central California, less than 30 minutes from San Francisco, virtually guarantees its popularity and prosperity, together with its attractive layout around Lake Merritt and its undeniable tourist appeal.

Lying alongside San Francisco Bay, the city of Oakland boasts almost 20 miles / 32 km of coastline. However, there is only one beach as such, namely Radio Beach, which is named after the tall red and white radio towers in this area.

Locals living in Oakland tend to describe the terrain as 'the hills' and 'the flatlands', while there are in excess of 50 different districts and neighborhoods. Downtown Oakland is where you will find much of the action, being based around Chinatown, Civic Center, the Jack London Square, the Lakeside Apartments District, Northgate, Oaksterdam, Old Oakland and Uptown.

Maps of Oakland clearly show the organized numbering and naming system of streets, and the very dominant Lake Merritt. Numbered streets head northwest to southeast, being intersected by named streets, such as Broadway, Webster Street and Harrison Street. The Jack London Square stands on the southern side of downtown Oakland, just across from Interstate I-880 (the Nimitz Freeway) and close to the Inner Harbor.

Various highways connect Oakland with the rest of California, with Interstate I-80 (the Lincoln Highway) crossing the waterfront and heading into San Francisco. Interstate I-880 heads southwards, linking Hayward, Union City, Fremont, Milpitas and San Jose. 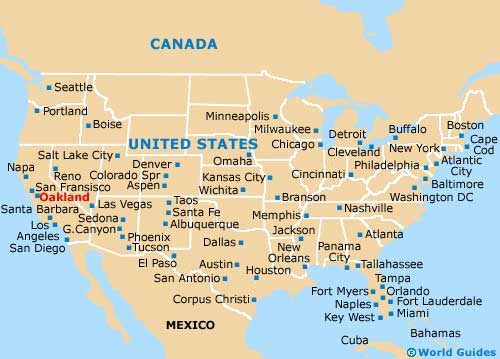