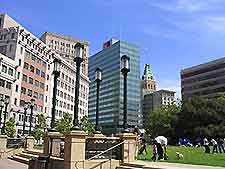 Bordering with five Easy Bay Regional Parks, Oakland is one of the major cities of the eastern side of Northern California and is home to a number of interesting neighborhood and districts. Oakland is located west of San Francisco, over the famous Bay Bridge, and is noted for being one of the three major shipping ports along the American West Coast. Divided into two distinct regions, 'the hills' and 'the flatlands', Oakland offers a diverse mix of culture and scenery.

Oakland city center provides visitors with a variety of things to do, ranging from visiting the Chinatown district to shopping at local boutiques. Accommodation can be found in and around the city center. Outside Oakland are some of its most appealing attractions, such as Chabot Space and Science Center and Preservation Park. Here are Oakland's main districts and neighborhoods. 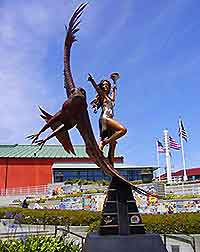 Otherwise known as the city center, Oakland's downtown district is comprised of restaurants, cafés, bars and shopping malls. Oakland Chinatown, not to be mistaken with the neighboring San Francisco Chinatown, is an attraction in itself. A neighborhood with a diverse community of Asians and Pacific islanders, Oakland Chinatown bustles with activity. Small restaurants, jewelry and other miscellaneous stores fill the streets. Street decorations are best viewed at night.

Several landmarks make up the Northern Oakland district, Piedmont Avenue being one of the main attractions. Named after the neighborhood surrounding the street, the center of Piedmont Avenue features some truly beautiful Oakland architecture, such as the Julia Morgan-designed red brick building and a variety of Fred Turner stores. Towards the end of Oakland's Piedmont Avenue is Mountain View Cemetery, with a great hillside backdrop. This Frederick Law Olmsted-designed cemetery contains the Chapel of the Chimes, which was designed by Julia Morgan. Noted as 'the neighborhood fixture', Fenton's Creamery serves everything from three course lunches to small snacks, sundaes and ice creams.

West Oakland is one of the oldest neighborhoods in Oakland, originating in the 18th century. African Americans have been the primary residents of West Oakland since the late 19th century. In addition, minor Cambodian and Latino groups populate the area. Western Oakland's busiest infrastructure is McClymonds Senior High School, founded in 1923.