Getting Around, Oakland Travel, Transport and Car Rental 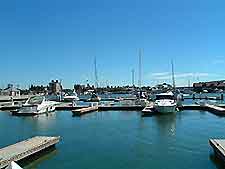 International visitors to this sizeable Californian city tend to arrive by air at the Oakland International Airport and then use a local shuttle bus to travel into the city center. Oakland can also be reached from other parts of the States, with transport options including road, coach and rail.

BART trains connect San Francisco and Oakland via an underwater transit tunnel. Relative walking distance between attractions makes this city an easy place to travel around, either simply on foot or by using local public transport.

The Oakland International Airport is a small airport servicing both domestic and international flights, mainly American West and American Airlines. There are two terminals, which are connected by a pedestrian walkway. Located some 12 miles / 19 km from the center, shuttle buses, taxis and hire cars are available to transport visitors into the heart of the city. 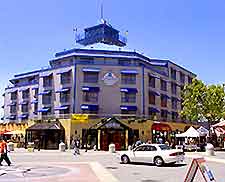 Major car rental travel companies are represented at the Oakland International Airport including Avis, Budget, Enterprise, National and Hertz. Shuttle buses provide transport from the terminals to the car rental center. There are also telephones situated in the Arrival halls of both terminals, from where transport can be arranged. Alternatively, the city can be reached by car from San Francisco, by heading along the Interstate I-80 across the Bay Bridge and following signs to downtown Oakland.

Scheduled buses and vans are available at the Oakland International Airport and transport visitors to the downtown area. Regional shuttle services can also be arranged and travel to most destinations, even providing a convenient door-to-door service. AirBART and AC Transit buses continuously travel between the airport and the BART (Bay Area Rapid Transit) railway station, from where connections with other BART services can be made. An hourly service operates at night between the airport and downtown San Francisco and Oakland, via Line N.

AC Transit's Line 58 connects the Amtrak station at Jack London Square to the Oakland International Airport. The station has a useful information center, which caters well to meet the needs of travelers.

Veteran's Cab and Friendly Cab, the two major taxi companies located at the Oakland International Airport, are readily available for use. They provide a convenient way to travel in and around town. Some interesting attractions are located on the outer ring and traveling by taxi is a reliable mode of transport, suiting those who don't find it necessary to hire a car.