Los Angeles Weather, When to Go and Climate Information 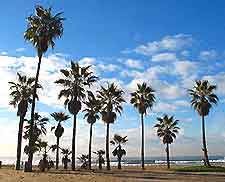 LA's precipitation usually varies with the seasons and the months of May, June, July and August are generally dry, but one thing remains constant and that is the sunshine and fine weather.

During the summer months of August and September, the Los Angeles climate and weather is very warm, with plenty of fine, sunny days. Average temperatures in Los Angeles during these months may soar to over 32°C / 90°F. At this time there is always the possibility of smog causing problems.


The weather in Los Angeles winter months of January and February tends to be wetter and cooler, with temperatures dropping to around 12°C / 55°F.


The following are the normal daily temperature ranges for Los Angeles: