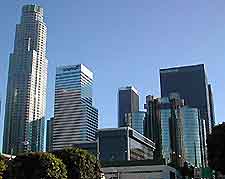 An exciting and glamorous Californian city of dreams, Los Angeles truly is an epic city, and when it comes to looking for accommodation, you will first need to decide which part of LA you want to experience the most. If you are planning to stay close to the beach, then consider the hotels around the districts of Santa Monica and Venice, where lodging with views of the Pacific Ocean is especially desirable.

Those visitors searching for the best in restaurants, shopping and nightlife in Los Angeles will likely favor the accommodation within the vibrant and upbeat West Hollywood area, while downtown LA is packed with history and beautiful architecture. The lodging scene in Hollywood comes with convenient access to the highly affordable Metrol Rail Red Line, with hotels on Highland Avenue boasting views of the famous hillside Hollywood sign. 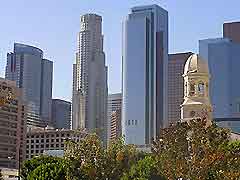 Beverly Hills is a particularly upmarket and affluent part of LA, and the accommodation here certainly matches its image, with the Hotel Palomar Los Angeles Westwood on the Wilshire Boulevard lying on the outskirts and close to Bel-Air and Rodeo Drive. On the western side of Beverly Hills, the Westwood Hotel on Hilgard Avenue is right next to the University of California Los Angeles (UCLA) campus.

There is also plenty of accommodation to be found within easy reach of the Los Angeles International Airport (LAX), which is just 15 miles / 24 km to the southwest, near to the Hawthorne and Inglewood suburbs. The closest hotels stand on the Airport Boulevard and include the Four Points by Sheraton, the Embassy Suites and the Super 8 Motel. The West Century Boulevard is also close to the LAX Airport and home to the Radisson, the Travelodge and the Westin. 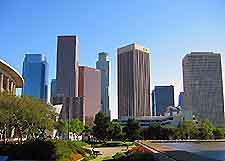 Budget hotels in Los Angeles can be found in the regions of North Alvarado Street, West Manchester Boulevard, West Sunset Boulevard and the Wiltshire Boulevard, amongst other roads. For mid-range accommodation in LA, the Miyako Hotel on East 1st Street enjoys a central location, as does the JW Marriott on the West Olympic Boulevard and the Kyoto Grand on South Los Angeles Street. Lying on the western side of the city and next to Beverly Hills, the Holiday Inn Express on the Santa Monica Boulevard is close to the action, while the Best Western Royal Palace Inn and Suites on South Sepulveda Boulevard is considerably cheaper.

Numerous four- and five-star hotels are concentrated around Los Angeles, and often offer exceptional cityscape panoramas. In particular, look out for the Four Seasons Hotel on South Doheny Drive, and the equally pricey SLS Hotel at Beverly Hills on the South La Cienega Boulevard, both of which boast five-star accommodation and pride themselves on their sophisticated hospitality.