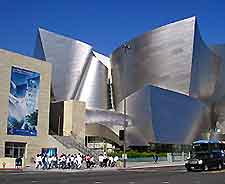 Because of the spread out nature of Los Angeles, many of LA's top tourist attractions are outside the central areas of downtown and Hollywood. While there is no shortage of attractions in these central districts, it is important that tourists in Los Angeles don't confine themselves to just these areas, therefore missing some of LA's top attractions and sightseeing opportunities.

That said, central Los Angeles makes the perfect starting point for any tour of the county and you will find many of the tourist attractions here are movie related, such as LA's studios of Paramount and CBS, while Hollywood Forever Cemetery and Mann's Chinese Theater commemorate some of Hollywood's favorite stars.

Address: Music Center / Performing Arts Center of Los Angeles County, 135 North Grand Avenue. Los Angeles, California CA, 90012, USA
Tel: +1 213 972 7211
LA's extravagant and eye-catching Walt Disney Concert Hall is not only a major attraction for tourists in Los Angeles, but it is also one of the city's most unusual buildings. Opened in 2003, the Walt Disney Concert Hall is home to many musical events, including regular performances by large orchestras and theatrical groups.
Open hours: daily
Admission: charge for events 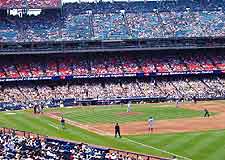 Address: 1000 Elysian Park Avenue, Los Angeles, California CA, 90012-1112, USA
Tel: +1 323 224 1500
Sports fans needn't be disappointed in Los Angeles and a trip to LA's Dodger Stadium for an authentic game of baseball should satiate anyone looking for some sport action. With a capacity for 56,000 spectators and a playing field famous as one of the best in the country, the stadium is also host to other large events and attractions throughout the year.
Open hours: hours vary
Admission: charge for events

Address: 6000 Santa Monica Boulevard, Los Angeles, California CA, 90038-1864, USA
Tel: +1 323 469 1181
Visiting cemeteries may not be number one on everyone's holiday itinerary, but if you're a fan of one of the many famous people buried in Los Angeles' Hollywood Forever Cemetery, then you may be intrigued to make a visit and pay your respects. Among those who have been laid to rest here are Rudolph Valentino, Douglas Fairbanks, Cecil B. DeMille, Tyrone Power and Peter Lorre.
Open hours: daily - 07:00 to 18:00
Admission: free 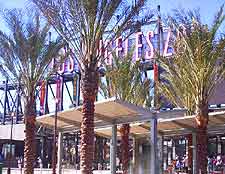 Address: Hollywood Boulevard, Hollywood, Los Angeles, California CA, USA
Tel: +1 323 461 3331
Functioning as a cinema, this impressive Los Angeles theater was designed as a replica of a Chinese temple and has been host to numerous movie premieres in LA over the years. Its attraction for Los Angeles tourists is the courtyard, which boasts hand and feet imprints, as well as the signatures of countless Hollywood stars including the likes of Elizabeth Taylor and Frank Sinatra, while in front of the theater is the Walk of Fame. This mile-long stretch honors more than 2,500 stars among which are Elvis and Marilyn Monroe, and their names can be seen inscribed in pink granite.
Open hours: forecourt open 24 hours, theater open daily
Admission: charge for cinema or tour 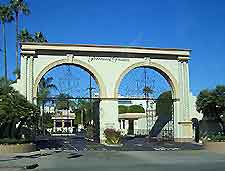 Address: 5555 Melrose Avenue, Los Angeles, California CA, 90038-3112, USA
Tel: +1 323 956 5000
The longest continuously operating film studios in Hollywood and one of the few that hasn't relocated, attractions at Los Angeles' Paramount Pictures include walking tours around the beautiful studios and sets. Paramount boasted numerous big stars during Hollywood's Golden Age, including Marlene Dietrich, Bing Crosby and Gloria Swanston, while in more recent years the studio has produced some of TV's most popular series, such as 'Star Trek', 'The Brady Bunch', 'Cheers' and 'Happy Days'.
Open hours: Monday to Friday - 09:00 to 14:00
Admission: charge