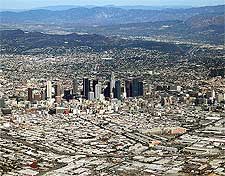 Nowadays one of the most influential cities on the planet and a world hub for culture, trade, entertainment, media, science, fashion and technology, Los Angeles boasts a lengthy history and was first settled some thousands of years ago by the Tongva and Chumash Native Americans.

Its first European arrival was the Spanish explorer Gaspar de Portola, who travelled here in 1769 with Juan Crespi, a Franciscan missionary. As part of the Spanish Empire, a tiny settlement was formed by the 44 mostly mulatto 'Los Pobladores'. It remained a small ranch-based pueblo for some decades. 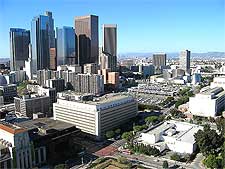 California was ceded to Mexico after the country became independent of Spain in 1821 and was returned to America via a treaty signed in 1847, following the Mexican-American War. In the meantime, a population boom in Los Angeles followed the discovery of gold in the region in 1842, an event that the town's businessmen took full advantage of. The major California gold rush in 1949 helped to fuel the fires of Los Angeles commerce, and the ending of the American Civil War in 1865 saw a flood of former African slaves headed for the city in search of work. The Southern Pacific Railway arrived in 1876, boosting the population still further.


Black Gold and the History of the Movies

By 1900, the city contained over 100,000 residents due to the discovery of oil in 1892, with the bonanza continuing to its peak in 1923, by which time Los Angeles was producing some 25 percent of the world's oil output. However, the benefits of the discovery of oil were about to be eclipsed by possibly the most significant development ever in the field of entertainment, the silent movie. 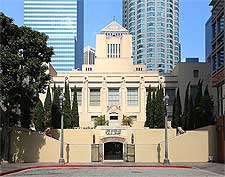 By 1915, Los Angeles had annexed Hollywood and more than ten movie companies were operating within its boundaries. Just ten years later, 80 per cent of the entire world's film industry was based in the city. The huge amount of money generated protected LA from much of the economic pain caused by the Great Depression and quickly increased the population number to over a million.

Patriotic movies sustained the studios during WWII, and increased post-war development saw Los Angeles spread into the San Fernando Valley, attracting more commerce and industry along the way. The next great revolution in technology, the Internet, was born in LA at its University of California when the very first ARPANET transmission was sent. In 1984, the city hosted the Olympic Games for the second time, the first having been in 1932, with both events the only two Olympiads that turned a profit - a fact of which the city is very proud.

Two years later, with the city still in Olympic mode, the famous Los Angeles Marathon took place for the first time, attracting 11,000 runners. Nowadays, LA is a spectacularly diverse sprawl of ethnic and indigenous populations, with huge immigrant communities from across the five continents settled in colorful enclaves all over the city. Cultural diversity comes as standard in every aspect of life in this unique mega-city, with its never-ending boomtown enthusiasm and love of entrepreneurship.