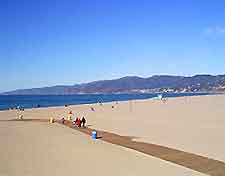 As the second-largest city in the US, it stands to reason that LA's attractions are spread across Los Angeles city and its sprawling suburbs. 'LA' refers to Los Angeles County, which is a collection of 88 cities, the heart of which is the downtown area. With LA being so expansive and difficult to define, tourists visiting Los Angeles may feel bewildered upon arrival - they needn't.

The districts that are of interest to visitors are the downtown area of Los Angeles, which doubles as the central business district (CBD); Hollywood, home to glitz and moviemaking glamour; West LA, which incorporates the exclusive neighborhoods of Beverly Hills and Bel Air; and LA's beaches on the Pacific coast about 12 miles to the west of downtown Los Angeles.

Address: Downtown, Los Angeles, California CA, USA
As the central business district, downtown LA is home to numerous office blocks and skyscrapers, as well as fine eateries, coffee shops and entertainment facilities catering for visitors and businesspeople alike. Architecture fans will want to check out Los Angeles' finest skyscrapers and it is here in the downtown district of LA that you will find impressive buildings such as the First Interstate World Trade Center and the Wells Fargo Center, while the district also houses some of the city's best museums.

Address: Hollywood, Los Angeles, California CA, USA
Hollywood is known around the globe as the film and entertainment capital of the world and it acts as a magnet for those who are seeking fame and fortune or are looking to live the American dream. The mere name conjures up images of glamour, wealth and sophistication, so visitors to Los Angeles may be surprised to find that ordinary people do actually live in this district, alongside stars of course! Overlooked by the 'Hollywood' sign that sits on the hills above is Los Angeles' Hollywood Boulevard. Home to film studios and television productions, this is where the action is centered, while West Hollywood is the heart of LA's gay community and it is here you will find excellent restaurants, cinemas, night clubs and coffee houses as well as trendy shops and art galleries, with Sunset Boulevard being the focal point. 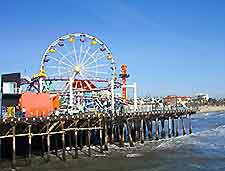 Around 12 miles / 19 km west of downtown Los Angeles, the Pacific coastline is one of LA's biggest attractions and the beach districts spread along the coast are both varied and beautiful. Epitomizing the LA stereotype, it is these Californian beaches and districts where you will find skimpily dressed rollerbladers, bronzed men showing off their brawn and scenes you thought only possible in 'Baywatch'. Popular favorites are Los Angeles' Santa Monica, Venice, Long, Muscle and Malibu beaches, all of which provide excellent opportunities for outdoor beach games and a great selection of cafés, restaurants and shops.

Address: West LA, Los Angeles, California CA, USA
This side of Los Angeles city incorporates the high-status neighborhoods and districts of Beverly Hills and Bel Air, known for attracting the rich, glamorous and sophisticated. House prices here are astronomical, but visitors to Los Angeles may find it amusing to take a drive through the tree-lined streets to pinpoint, admire and envy the impressive mansions of the rich and famous, although you won't see much more than the security gates of many properties. Rodeo Drive in Los Angeles is an exclusive shopping district in West LA, where you can mingle with actors and actresses while trying on the latest Gucci or Armani fashions.