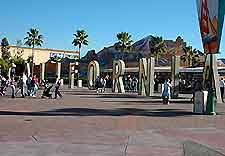 LA's number one attraction is at Anaheim, about 25 miles / 40 km from downtown Los Angeles. Disneyland is most tourists' primary reason for visiting this part of California, while the amazing Pacific coastline, with its chic resorts, shopping and promenades, complements any trip.

The waterfront areas capture LA lifestyle in a way that most of us have only seen on TV and it is here you'll find beach babes, handsome surfers and many attractions lining the shores around Los Angeles. Be sure not to miss Universal Studios and Warner Bros tours, which should be a priority on any holiday itinerary. 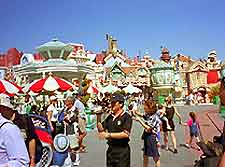 Address: Malibu Beach, Los Angeles, California CA, USA
Popular among the wealthy in Los Angeles, this favorite hangout is monopolized by the rich and famous. Lined with million-dollar mansions, many of which have their own private stretch of beach, this section of LA coastline has been forever immortalized by 'Baywatch'. Malibu Beach boasts a pier, while there is plenty of sand on which to indulge in volleyball or work on your tan. 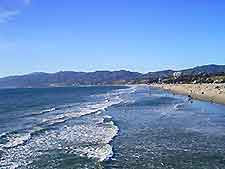 Address: Santa Monica Beach, Los Angeles, California CA, USA
Another favorite escape of Hollywood residents, Santa Monica Beach attracts a somewhat alternative crowd and is within easy reach of Los Angeles city center. One-time home to stars from Hollywood's Golden Age including Greta Garbo and Clark Gable, the palm-lined cliffs are now home to a new generation of superstars. Attractions at Santa Monica Beach include the popular pier, boasting carnival rides and acclaimed seafood restaurants, while Third Street Promenade is home to a plethora of boutiques, cafés and bars, making Santa Monica a great place to visit during the day or at night.

Address: Venice Beach, Los Angeles, California CA, USA
One of the livelier beaches in the Los Angeles area, the famous Ocean Front Walk attracts everything from street performers and entertainers to vendors and musicians. This beach is likely to live up to your preconceptions of what an LA beach is like, with blonde-haired, curvaceous women rollerblading and bronze, athletic men working out. When you've had your fill of watching beautiful people, browse among the coffee shops and private retailers before heading home before dark - this stretch of beach can be dangerous at night. 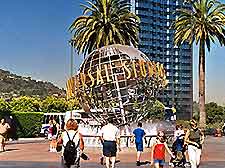 Address: 100 Universal City Plaza, University City, Los Angeles, California CA, USA
Tel: +1 818 622 3801
Second only to Disneyland, Universal Studios is one of LA's top tourist attractions which will take you on an adventure of movie magic. See the sets of some of your favorite films including 'Jaws' and 'Back to the Future' and experience thrilling special effects on a tour of the studios. If that isn't enough to satisfy you, then you can experience some stomach-swirling attractions and rides, including the 'Jurassic Park' ride, which takes you through a jungle where you'll encounter numerous terrifying dinosaurs. This is an excellent attraction for families in Los Angeles and won't leave you feeling disappointed.
Open hours: daily - 08:00 to 22:00, seasonal variations apply
Admission: charge, discount for children under 10

Address: 4000 Warner Boulevard, Burbank, Los Angeles, California CA, USA
Tel: +1 818 954 3000
With more of a focus on the technical side of filmmaking, Warner Bros Studios provides tours that will give you an insight into the filmmaking procedure. All aspects of the studio are covered on the tour including prop sets, wardrobe and sound attractions, and the studios are easily reached from the city center. The tour of Warner Bros Studios also gives visitors the opportunity to visit an active film set.
Open hours: Monday to Friday - 09:00 to 16:00, seasonal variations apply
Admission: charge