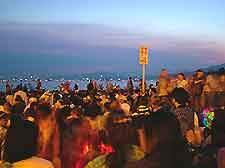 It is no surprise that Los Angeles' calendar of events is packed full of film festivals and occasions celebrating its heritage as home of stars, moviemaking and glamour. The Academy Awards are the number one event in Los Angeles, where the red carpet is unrolled and celebrities of the highest caliber showcase the most talked-about dresses of the year.

Should you want to party over something other than films in Los Angeles, there are an equal number of other festive celebrations and things to do around the year.