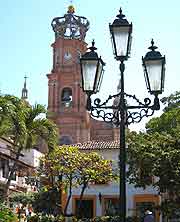 Nowadays one of the best-known resorts on the west coast of Mexico, Puerto Vallarta has a rich history dating back to pre-Hispanic times. However, little is known about the city before the 1800s, when it was developed as a port to serve the up-and-coming mining towns in the Sierra.

There is some evidence of habitation dating back to 580 BC, which is well-documented by the Cuale Archaeological Museum, situated on the west shore of Isla Cuale. There is also some record of battles between indigenous Indians and conquering Spanish colonialists, which are believed to have taken place during the 16th century.

The 18th-century growth of silver mining towns in the Sierra, most notably Mascota, led Puerto Vallarta to become well-established as a beach-landing port. It also catered to its very first tourists - mine workers, who came to enjoy rest and recreation in the village.


The purchase of land surrounding the village by the Union en Cuale mining company in 1859 is regarded as one of the most important events in the history of Puerto Vallarta. This allowed the village to expand its position on the banks of the River Cuale, incorporating the river mouth itself. By the mid-1880s, it was believed that 800 people resided in the village.

Considered to be one of the most unstable times in Puerto Vallarta, the early 20th century saw a number of disputes between landowners, notably Alfred Geist from Union en Cuale. Local agricultural cooperatives began to feel that the mining company had too much control over the now growing town.

There were also more serious skirmishes between forces taking part in the Cristero War during the late 1920s. However, some of Puerto Vallarta's most recognisable landmarks were constructed at this time, including the 1922 Saucedo Theater. Visitors to the resort can still enjoy its Belle Epoque architecture today. 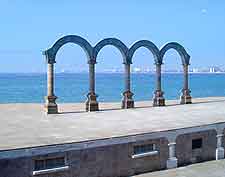 The year 1932 saw the establishment of the resort's first air service. However, it wasn't until 1942 that tourists began to arrive here en-masse, when the Air Transport Company of Jalisco began to offer trips from Guadalajara. During the 1950s, the resort became a popular bohemian hangout for US artists and writers, while its backdrop later appeared in many popular films of the time. The most famous of these was the Night of the Iguana (1964), directed by John Huston, who is remembered by a statue on Isla Cuale. The statue was built to commemorate the film's 25th anniversary.

Through the 1960s and '70s, the Mexican government invested massively in the resort's infrastructure, and it was eventually recognised as a city in 1968. The 1982 devaluation of the Mexican peso meant that holidays in the resort were at bargain-basement levels and the following years saw visitor numbers peak.

In the 1990s, Puerto Vallarta was overtaken by resorts such as Cancun, but it retains an inherent charm and this has kept it on the tourist map in the 21st century.