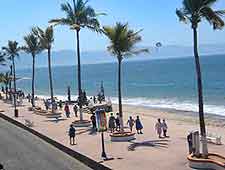 Puerto Vallarta is a major coastal resort and features a number of prominent local landmarks, such as the El Malecón boardwalk, although the city does not feature many modern high-rise buildings as such. The Westin Resort and Spa Puerto Vallarta is amongst the tallest landmarks in the city at almost 50 metres / 164 feet in height.

More notable landmarks in Puerto Vallarta include the Casa Kimberley, the actual mansion than Richard Burton bought for his wife Elizabeth Taylor, and the Cathedral of Our Lady of Guadalupe, which is known locally as La Iglesia de Nuestra Senora de Guadalupe. 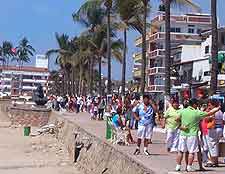 Address: Paseo Diaz Ordaz, Puerto Vallarta, 48300, Mexico, MX
Puerto's Vallarta's Malecón boardwalk is a particularly famous local landmark and stretches alongside the beachfront, offering great views across Banderas Bay, which is outstanding when the sun begins to set. Many bars and eateries are clustered around the Malecón and offer fine dining with outstanding scenery.
Open hours: daily - 24 hours
Admission: free 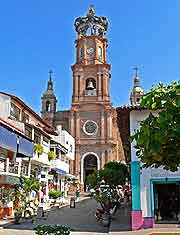 Address: Calle Hidalgo, Puerto Vallarta, 48310, Mexico, MX
Tel: +52 322 222 1326
Puerto Vallarta's magnificent Cathedral of Our Lady of Guadalupe (La Iglesia de Nuestra Senora de Guadalupe) lies in the very heart of the city, where it has become a much-loved landmark and embraced by the community. A pedestrianised street of shops lead towards the cathedral entrance, which dominates the area with its grand bell tower, topped with crown, which was actually dislodged during the 1995 earthquake. Sunday services take place at 10:00 and are usually well attended.
Open hours: daily
Admission: free, donations suggested 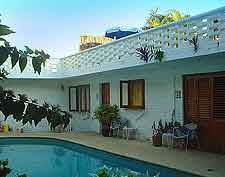 Address: Zaragoza 445, Puerto Vallarta, 48300, Mexico, MX
Tel: +52 322 222 1336
The Casa Kimberley is amongst the most visited landmarks in the whole of Puerto Vallarta and was purchased by Richard Burton during the 1960s. Now privately owned by an American family, the home is open to members of the general public and retains much of its original furnishings, including a pink heart-shaped bath installed especially for Elizabeth Taylor. The Casa Kimberley was extended in 1970 by Richard Burton and currently operates as both a museum and bed and breakfast, with rooms overlooking the Old Town area of the city, along with the mountains and Banderas Bay (Bahia de Banderas) itself.
Open hours: daily - 09:00 to 18:00
Admission: charge