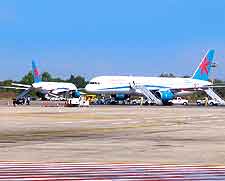 The airport serving the popular Mexican resort of Puerto Vallarta is officially named after former Mexican president, Gustavo Diaz Ordaz. After Puerto Vallarta's tourism industry began during the 1960s, Ordaz helped transform this formerly rural airport into the modern facility it is today - previously passengers were transported by donkeys and cows frequently roamed onto runways.

Presently, the Gustavo Diaz Ordaz International Airport greets over 2.5 million passengers annually, most of whom arrive from far colder North American cities to soak up Puerto Vallarta's year-round sunshine and swim in the warm waters of the Bay of Banderas. March is the busiest month for this air facility, whose top nine busiest international routes are all to American cities.

The Pacific Ocean coastline is just a brief journey away from the Gustavo Diaz Ordaz International Airport, which is conveniently situated within the city limits, near many of its most popular resorts.

Car hire in Puerto Vallarta may cost more than in most European and American cities, but many visitors believe the freedom of exploring the nearby Pacific coastline at their own leisurely pace is well worth it. Motorists must give themselves plenty of extra time when driving the main M-200 trunk road during the day.

Puerto Vallarta's bus network is based on a zone system, where prices depend on how many zones are crossed during a bus journey. The only buses which stop at the Gustavo Diaz Ordaz International Airport are courtesy hotel shuttles and minivans known as 'combi' buses. Visitors can pay for combi bus journeys in advance during the day, by visiting the relevant kiosk in Arrivals. Buses arrive and depart at least ten times an hour during busy periods. Of note, those heading into the city centre should be sure to only board buses marked 'Centro'.