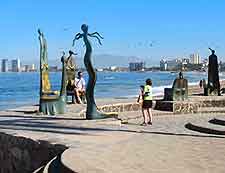 November is another busy month in Puerto Vallarta and both the International Sailfish Tournament and the International Gourmet Festival always attract large crowds. Each Thursday, look out for the free concerts, which take place at the Camino Real Hotel resort and often include dancing demonstrations. Puerto Vallarta's annual events calendar is shown and includes the main festivals.