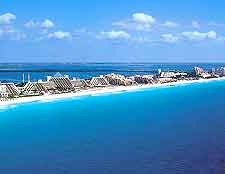 Cancun is a relatively new coastal resort in Mexico and was created in an attempt to replicate the success and popularity of Acapulco and it's major tourism boom. Part of the Yucatán Peninsula, Cancun quickly evolved into a truly world-class resort, with many outstanding stretches of white sandy beaches and Caribbean coastline. The development of the hotel complexes and overall infrastructure could hardly keep up with demand and Cancun quickly became a huge tourism success, attracting even more tourists than Acapulco itself.

The city of Cancun is split into two main areas, Ciudad Cancún (downtown) and the connected island area of the Hotel Zone (Zona Hotelera). Downtown Cancun is of relatively little interest for tourists and acts rather like a service centre for the actual resort. Instead, the main action, attractions, accommodation, shopping complexes, beaches and tourism in general is based around the Zona Hotelera, where the four-lane Boulevard Kukulcán is a major thoroughfare connecting Ciudad Cancún. 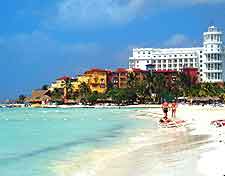 There are two main tourism offices in the city, the Cancun Convention and Visitors Bureau on the Avenida Cobá and the nearby State Tourism Office off the Avenida Tulum. The choice of beaches in Cancun is overwhelming and a number can only be accessed by walking through hotel lobbies.

Some of the best beaches (playas) include Ballenas, Caracol, Delfines, Langosta, Las Perlas, Linda, Marlin and Tortugas, with many further beaches nearby, on the scenic coastline of the Isla Mujeres.

As with most hotels spread around the Yucatan Peninsula, those in Cancun are known to fluctuate in price greatly, depending upon the season. During the Easter week Semana Santa celebrations, rates can rise steeply, as well as during the peak season between December and March, and outside of these times the most affordable and Cancun vacation deals are at their most plentiful. It is worth bearing in mind that even budget accommodation in downtown Cancun is generally more expensive than in other comparable Mexican cities, and lodging within the Zona Hotelera and around the nearby Caribbean beaches generally falls into the bracket above. 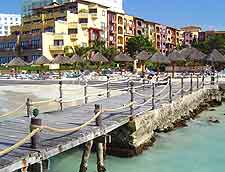 Being a major coastal resort with a superb selection of beaches, it will come as no real surprise that many of the main tourist attractions and draw cards and based around Cancun's beautiful coastline. All kinds of water sports are available here, such as scuba diving, snorkelling, windsurfing, jet skiing and even parasailing high in the air, where the views across Cancun and the Caribbean Sea are simply awesome. Sailing, yachting and dolphin spotting cruises are also extremely popular in Cancun and it is even possible to actually swim with dolphins at the nearby Isla Mujeres. More information about Cancun Tourist Attractions. 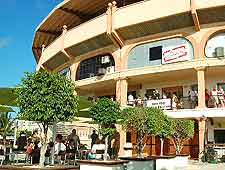 On good old terra-firma and yet still with a maritime theme, many families enjoy visiting the Acuario Interactivo (Interactive Aquarium Cancun), where a host of colourful marine creature await, including both sharks and dolphins. Children will also enjoy taking an 'Indiana Jones' role at the MayaVentura labyrinth, where you search for treasure, dodging the obstacles and challenges along the way.

Cancun may by a glitzy holiday resort, but it does have a strong and important Mayan past, with two main sites of Mayan remains. The Centro Ceremonial Kohunlich is of great historical significance in Cancun and features an ancient Mayan Sun Temple. Traditional bullfighting remains surprisingly popular in Cancun and takes place each Wednesday at the Plaza de Toros, a particularly beautiful venue. For churchgoers, the Puerta del Cielo, Iglesia de Nuestra Senora del Carmen and the Iglesia de Cristo Rey are amongst Cancun's most significant religious buildings. More information about Cancun Landmarks. 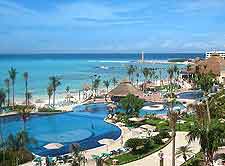 The museums around Cancun celebrate the region's past and offer a range of information about Quintana Roo and Mexico in general. Particularly impressive are the archaeological exhibits at the Museo del INAH (Museo del National Institute of Anthropology and History) and the ruins at the 13th-century Zona Arqueológica El Rey, which are best explored on a guided tour. For art lovers in Cancun, there are plenty of reputable galleries around the city, including a number along the Boulevard Kukulcán and in the Plaza Caracol mall. Art galleries in Cancun display an array of traditional and contemporary Mexican art works, including a number of unusual hand-carved wooden figures. More information about Cancun Museums and Cancun Art Galleries. 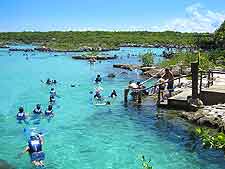 Many tourists stay in Cancun for the entire duration of their holiday, while others are looking for the ultimate Mexican experience and choose to head outside of the city environs. Nearby Puerto Morelos stands directly south of Cancun and is a small fishing village with an enormous reef, perfect for keen scuba divers. Further south, the island of Cozumel is home to in excess of 100 top dive spots and also good for snorkelling and a range of other water sports. More information about Cancun Attractions Nearby. 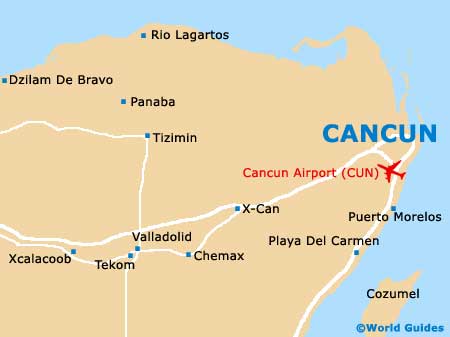