A popular beach resort located on the westerly Pacific coast of Mexico, Puerto Vallarta is often abbreviated as simply 'PV' or 'Vallarta'. Puerto Vallarta stands next to Banderas Bay (Bahia de Banderas), which is the country's biggest natural bay and also considered to be a municipality.

Located in Jalisco state, Puerto Vallarta has a population of around 180,000 residents and is home to a thriving port, where many major cruise liners and ships dock most days. The city itself is a fairly new addition to the tourism industry, being established as a small village in the mid-19th century and only really gaining popularity and notoriety in the 1960s.

Central Puerto Vallarta is easy to reach from the airport and bus station, although a map is always useful and available from most good bookstores in the city itself. Much of the sightseeing is at its best around the Zona Centro, Puerto Vallarta's historic old town centre, which is divided by the wide Cuale River (Rio Cuale) and linked by two main bridges. The small Isle Cuale is actually located in the centre of the river.

The Plaza Principal (Plaza de Armas) is a particularly important location in this part of Puerto Vallarta and close to the coast, being sandwiched between the two main thoroughfares of Juarez and Morelos. Nearby, the Malecon is a popular, scenic beachfront promenade in Puerto Vallarta and worth finding, being located directly north of the nearby amphitheatre. 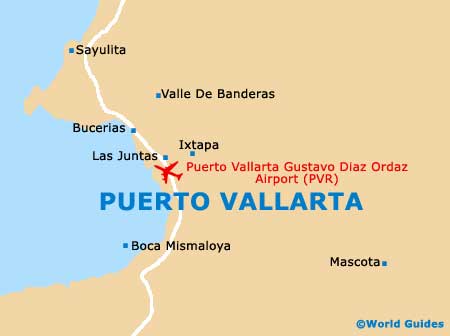