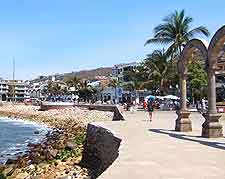 Located on Mexico's westerly coastline, Puerto Vallarta is based around the beautiful Bay of Banderas (Bahia de Banderas) and comprises several important districts, neighbourhoods and local communities. The Plaza Principal marks the very heart of Puerto Vallarta's Zona Centro district (Central Zone), where much of the action takes place.

Most people holidaying in Puerto Vallarta will stay within the Zone Hotelera district, where beachfront hotels are commonplace. For the many historical attractions, the Viejo Vallarta district lies to one side of downtown Puerto Vallarta and is home to the cathedral. 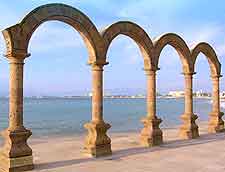 The Plaza Principal public square also goes by the name of the Plaza de Armas and is sandwiched by both Juárez and Morelos. The city's famous coastal boulevard, the Malecón, stretches northwards and is lined with numerous bars, eateries, clubs and hotels. Nearby and on the coastal side of the Plaza Principal is the Puerto Vallarta amphitheatre and the iconic Los Arcos arches.

Sited on the northern side of Puerto Vallarta, the Zone Hotelera district (Hotel Zone), features a long stretch of enormous resort hotels and luxury accommodation, much of which lies along the Boulevard Francisco Medina Ascencio. The Zone Hotelera is close to the Marina Vallarta, where many swanky yachts reside. Located on the northern side of Puerto Vallarta's Zona Hotelera, the Playa Las Glorian is a long, sandy beach, famed for its sunsets and backed by a series of hotel complexes. 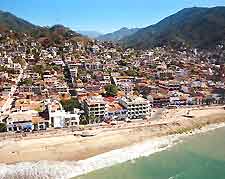 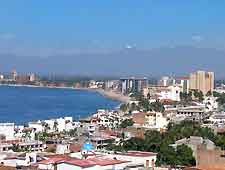 The Bay district is based next to the magnificent Bahia de Banderas (Banderas Bay / Bay of Flags), around which the city of Puerto Vallarta radiates outwards. One of the country's biggest bays of its kind, the Bahia de Banderas starts where both the Pacific Ocean and the Sea of Cortez come together, sited between the Sierra del Cuale and the Sierra De Vallejo mountains. Many beaches, clubs and hotels surround the bay itself, often boasting superb views. On the southern side of Puerto Vallarta's bay district, the Playa Conchas Chinas offers something different to the main sandy beaches, being rocky, filled with pools and generally much quieter. 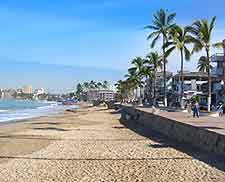 Puerto Vallarta's endless sandy beaches have long been the area's number one attraction and offer places to relax, sunbathe, swim and enjoy an array of water sports, such as scuba diving, snorkelling and jet skiing. Scattered all around the coastline of the Bahia de Banderas, each of the beaches has something different to offer. Further quality beaches can be found on the nearby Marieta Islands, a popular day trip from Puerto Vallarta, where the underwater scenery is truly spectacular. More information about Puerto Vallarta Beaches. 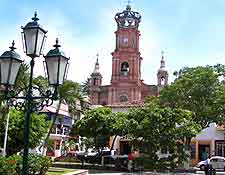 The Viejo Vallarta district (Old Vallarta) lies next to the Rio Cuale, alongside downtown Puerto Vallarta, and is full of historic character. With a number of good hotels and affordable restaurants, the main attractions in this colourful neighbourhood are the buildings and coastal views. The magnificent Cathedral of Our Lady of Guadalupe (La Iglesia de Nuestra Senora de Guadalupe / Templo de Guadalupe) is of particularly significance, dominating the area and built during the 1930s and sited uphill from the Zona Centro's Plaza Principal.