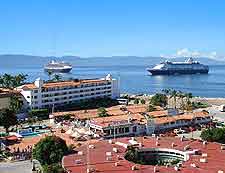 Often abbreviated as just 'PV', Puerto Vallarta was once a peaceful seaside village and has gained tremendous popularity over the years, becoming one of Mexico's leading coastal resorts. Located alongside the sparkling Banderas Bay (Bahia de Banderas) and in the Mexican state of Jalisco, Puerto Vallarta attracts literally millions of tourists each year, who come to enjoy the many activities around the white sandy beaches.

A number of the most frequented beaches in Puerto Vallarta now feature imposing backdrops by huge hotel complexes and condos, particularly around the Hotel Zone (Zona Hotelera). However, if you look a little further you will discover cobbled streets, traditional white adobe homes and many orange-tiled roofs, ensuring that Puerto Vallarta retains much of its historic Mexican character.

Tourism is not just the main industry in Puerto Vallarta it is really the city's only industry. With such an influx of tourists, the city's tourism industry has created a resort full of restaurants, shops and bilingual staff, where English is spoken almost as freely as Spanish. For tourist information, pay a visit to either the Puerto Vallarta Municipal Tourist Office in the Juárez area, or the Puerto Vallarta Convention and Visitor's Bureau at Planta Baja. 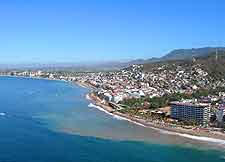 Apart from the many sandy beaches around Puerto Vallarta, there are further coastal attractions for tourists, such as scuba diving within Banderas Bay and also around the nearby Marieta Islands, amongst other locations. Many tourists also enjoy the opportunity to swim, snorkel, water ski, windsurf, parasail and even zoom around the bay on a fun banana boat. Hiking, cycling, eco tours, sailing, sportfishing and bullfighting at the Plaza de Toros are also popular activities in Puerto Vallarta, along with dolphin watching cruises and even seasonal whale watching between November and April. Families will always find a trip to Puerto Vallarta's Aquatic Splash Park (Splash Parque Acuático) a great way to cool down when the sun is shining, while for something different, take a guided tour of the Tequila Porfidio factory and sample this famous Mexican tipple. More information about Puerto Vallarta Tourist Attractions. 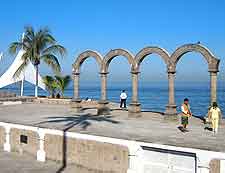 Several appealing local landmarks add interest for holiday makers staying in Puerto Vallarta and make a pleasant alternative to sunbathing on the beach. Especially famous is the Casa Kimberley mansion, which was bought as a present for movie star Elizabeth Taylor by her besotted actor husband, Richard Burton. A well-known structure in central Puerto Vallarta, the Cathedral of Our Lady of Guadalupe (La Iglesia de Nuestra Senora de Guadalupe) dominates the area with its bold architecture and tall bell tower, while the Malecón Boardwalk (El Malecón) is a great place for a stroll and stretches next the coastline, offering great views along the way. More information about Puerto Vallarta Landmarks. 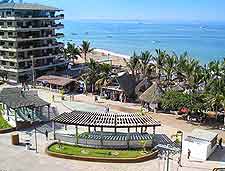 For a range of information about Puerto Vallarta and the Jalisco area as a whole, the Cuale Museum (Museo del Cuale) is located on the Isla Cuale and despite being small in size, is full of archaeological treasures and traditional Mexican handicrafts. Art galleries are also in good supply and offer a range of modern and traditional pieces with plenty of Latin American character. The main galleries include the Manuel Lepe Museum, Galeria Olinala, the Latin American Art Gallery (Galeria Arte Latinoamericano), and also the Arte Popular Mexicano Galeria, which can be found in central Puerto Vallarta and features ceramics and even colourful papier maché sculptures. More information about Puerto Vallarta Museums and Puerto Vallarta Art Galleries. 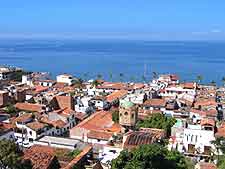 If you head directly south of Puerto Vallarta it won't be long until you encounter the many Costalegre beaches and resorts, which stretch alongside Mexico's Pacific coast. The area also goes by the name of the 'Mexican Riviera' and favourite beaches include the sheltered Playa Pérula and the Playa Tenacatita, where snorkelling has become a popular pastime. Also within reach of Puerto Vallarta and located on the Bahia de Navidad is the beach resort of San Patricio - Melaque, which was once two separate haciendas, now merged to become one town. Much larger is Guadalajara, Mexico's number two city and still close to Puerto Vallarta. Guadalajara is a leading centre of commerce, where beneath the skyscrapers you will still find plenty of traditional Mexican character. More information about Puerto Vallarta Attractions Nearby.