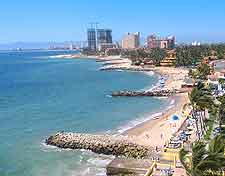 Puerto Vallarta's many beaches are the reason that so many tourists visit this part of Jalisco.

The two main beaches nearest to Puerto Vallarta are the Playa de los Muertos and the Playa Olas Atlas, both of which lie on the southern side of the Rio Cuale.

Located at the southerly end of Puerto Vallarta's Playa de los Muertos is an area known as 'Blue Chairs' and this is a popular gay hangout and amongst the biggest gay beachfront resorts in existence. 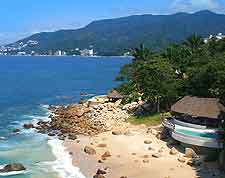 Countless popular beaches lie on the northern side of Puerto Vallarta and within the Hotel Zone (Zona Hotelera). These include:


Slightly further to the north and sited alongside the Marina Vallarta is the Playa El Salado. A number of excellent beaches can also be found around Nuevo Vallarta and in particular, between the Punta de Mita and the bay itself.

A good selection of beaches are also located on the southern side of Puerto Vallarta and along the coastal Highway 200. These beaches are well connected by minibuses and include: 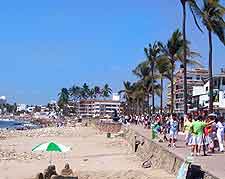 Sited at just over 10 km / 6 miles to the south of Puerto Vallarta, Mismaloya is a small cove complete with secluded beach and is best known for being a location in the 1964 movie, the 'Night of the Iguana', which starred Richard Burton and Ava Gardner.

Mismaloya is connected by bus, although it is easiest to reach by car, while further south, the seaside village of Boca de Tomatlán features a pleasant beach, next to the mouth of the Rio de Tomatlán. A number of fairly isolated beaches are nearby and still within easy reach of central Puerto Vallarta, including: