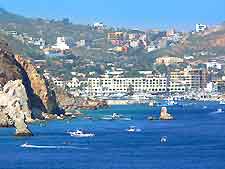 Cabo San Lucas is an up-and-coming tourist resort and often referred to simply as 'Cabo', being sandwiched between San José del Cabo and San Lucas. With beautiful, pristine beaches, marinas and endless water sports, Cabo San Lucas is also extremely appealing for those who like to fish and play golf.

Offering the perfect weekend break, many tourists choose Cabo San Lucas for its exceptional nightlife. Full of bars, clubs and restaurants, the city offers endless beach fun during the day, particularly around the Playa Médano, the Playa Solmar and the Playa del Amor. However, there is still plenty to do when the sun eventually sets, and the city of Cabo San Lucas takes on a completely different, vibrant and exciting character.

The Boulevard Marina is a prominent stretch in Cabo San Lucas and lined with places of interest, along with timeshare sellers, who are often happy to offer tourism advice. However, for the best tourist information, pay a visit to the Cabo San Lucas Tourist Office along the Calle Madero. 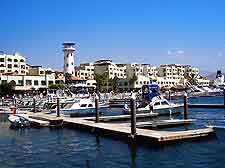 An array of exciting tourist attractions lie around the shoreline of Cabo San Lucas. These include bungee jumping next to Medano Beach, cruising around the coast in glass bottom boats, sportfishing for giant marlin and yellowfin tuna off the Boulevard Marina, scuba diving at the Roca Pelicano, water skiing behind fast speedboats, and parasailing high over the Sea of Cortez. During the winter months, whale watching cruises offer breathtaking views of enormous grey whales, which are also easy to spot during a helicopter tour of the Cabo San Lucas area. More information about Cabo San Lucas Tourist Attractions. 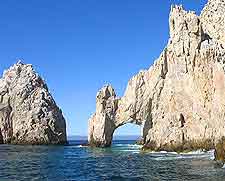 Away from the beaches and around central Cabo San Lucas itself, there is still plenty for tourists to enjoy, such as humane bullfights, and picnics in the Town Square, where many local celebrations often take place. Many prominent landmarks are scattered all over Cabo San Lucas, both modern and historic, such as the remains of the Old Lighthouse (El Faro Viejo), the beautiful Church of San Lucas (Iglesia de San Lucas), the Colonial-style Casa de la Cultura, and the natural Land's End peninsula, where you will discover the city's iconic rock archway 'El Arco' and a nearby group of sea lions, where both the Sea of Cortez and the Pacific Ocean actually meet. More information about Cabo San Lucas Landmarks. 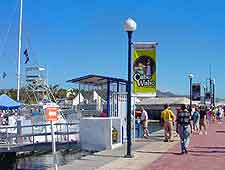 For an insight into the Baja California Sur region, a number of museums and galleries can be found within Cabo San Lucas. The Huichol Museum offers information about the Wixáritari (Huichol Indians) and displays their creative beaded pieces, while the centrally located Museo de las Californias boasts an array of important artefacts and documents. For maritime information, the Cabo San Lucas Fishing Museum (Pasado Marina de Museo) is a good place to discover what really lies beneath the nearby water's surface. Sited alongside Cabo San Lucas marina, the Sergio Bustamante Gallery displays the usual art works from acclaimed Mexican artist Sergio Bustamante. Both the Bassi Gallery and the Old Town Gallery are also worth a look and a good place to find a quality souvenir of your time in Cabo San Lucas. More information about Cabo San Lucas Museums and Cabo San Lucas Art Galleries. 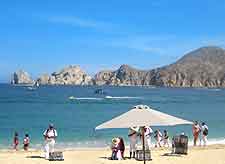 A number of resorts, towns and village are also to be found close to Cabo San Lucas and along the coastline, best reached by either car or bus. The nearby resort of San José del Cabo has become a favourite tourist destination in recent years and features plenty of beachfront accommodation and good restaurants, particularly on the Boulevard Mijares. Also close to Cabo San Lucas is the bohemian town of Todos Santos, and the lush village of La Candelaria. More information about Cabo San Lucas Attractions Nearby. 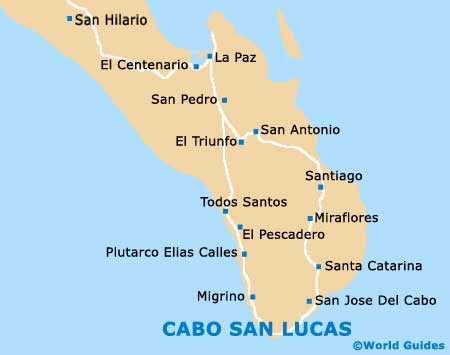