Getting Around, Quebec City Travel, Transport and Car Rental 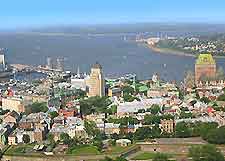 Public transport is plentiful in Quebec City and there are many ways in which you can travel around the area. Quebec City's airport, the Quebec Jean Lesage International Airport (YQB), is located nearby and is an important transport hub. Buses are a popular and cheap way to travel to and from the airport, and also around the Quebec City area, being used by both locals and visitors.

Quebec City features three rail stations, with regular trains providing travel to a number of nearby towns and cities. Other methods of transportation in Quebec City include ferries, taxi travel, bicycle rental and even horse-drawn carriages. 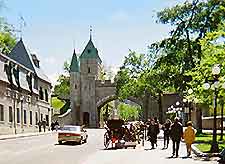 Car rental is on offer both at the airport from a range of notable car transport companies, and also in Quebec City, along the Côte du Palais. Cars are not really needed to travel around in the compact center of Quebec City, and although a number of car parks are available, the charges vary greatly. The car parking in St. Roch is almost half the price of parking lots in Upper Town. Inexpensive parking can also be found along the Rue St. Vallier Est and the Quebec City tourist information center can provide a list of all city-operated car parks if required. However, travel by car is the perfect way to explore the surrounding areas of Quebec City and this method of transport is particularly convenient for day trips and excursions. 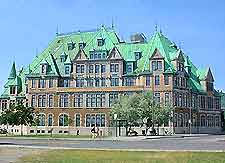 Tel: +1 418 692 3940
Surprisingly for a relatively small city, Quebec City is home to three trains stations, which are connected by regular bus transport. The main train station in Quebec City is the striking, renovated Gare du Palais, along St. Paul Street in the Lower Town district. The CN Station can be found in Sainte Foy, to the southwest of downtown Quebec City, and the third station lies on the south shore, in the nearby town of Charny. Regular trains travel to Montreal, Moncton and New Brunswick, offering particularly scenic views along the way.

Tel: +1 418 644 3704
Daily ferries travel between Quebec City and nearby Lévis, operating throughout the day and much of the night. Fares are fairly inexpensive even for cars, and are reduced between October and March. Although the ferry cruises last just a few minutes, the views of Quebec City are superb and this is an excellent way to fully appreciate the skyline, which includes the eye-catching Chateau Frontenac. Quebec City's main ferry transport terminal can be found at the Place Royale, close to Quebec harbor.

Taxis operate in the Quebec City area and are often used to travel to and from the nearby airport. The main taxi transport companies in the city include the Taxi Co-op, TAXI Quebec and Taxi Laurier.

Known locally at Calèche, horse-drawn carriages in Quebec City are particularly targeted at tourists and couples, and are a romantic way to travel around the center. Lasting approximately 40 minutes, these rides are on the expensive side, but lots of fun.

Tel: +1 418 692 3643
For those who like to travel at a more leisurely pace, bicycles are a preferred method of transport in and around Quebec City. Available for rent on an hourly or daily basis along Sainte Anne Street in Old Town Quebec City, a popular cycle trail stretches for around 16 miles / 25 km between the Old Port and the Parc de la Chute Montmorency. A further cycle trail provides travel alongside the St. Charles River, with many additional routes and pathways located throughout the Quebec City area.